Why We Love TV 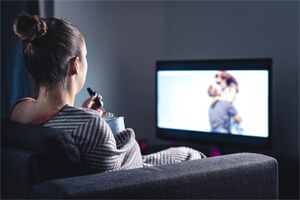 There are endless reasons why we love television! Some of the reasons may not be the most relatable, but a few of them definitely apply to the masses. I hope you agree with some of the seven reasons why I love TV.

Even since the Internet, television is still one of the fastest forms of entertainment out there, other than perhaps music. In the time it takes to watch just one movie you can watch and finish multiple episodes of several TV shows. This will be a downside to some, but to me it's all pure upside. The viewer is left with two options: either watch several episodes in one go (binge watch) or, if they're in a rush, they can just watch one episode of their favorite show and then return later. With a book, a reader is likely to get sucked into it. With a movie a viewer is likely to have to stay put for two hours or more. Television offers an easy distraction from common everyday life.

Television is just one of many forms of entertainment that is used for escapism. But with television, my obsession began when I was a child who didn't leave the house because I was always home doing chores, schoolwork, or well - just nothing. For me, TV became how I escaped from the everyday routine that was my life. This is one of the top reasons why I just love TV. It might not seem like a lighthearted reason to love television, but who doesn't need a little bit of escape now and then?

Television has exploded in the past 10 years. Netflix really began pushing the envelope with their production of original serieses. Yes there's a type of movie, book, or music for everyone, but with TV there's so much of everything! I consider this to be the real golden age of TV. Movie actors who use to snub doing TV are now tripping over themselves to get a Netflix or Hulu TV series. The quality of TV shows often surpasses the biggest movie blockbuster productions. Marvel spent $75 million for just three episode of their She-Hulk series. That's about 90 minutes of content and was more expensive than the Deadpool movie. There's just so much variety (and quality) available nowadays.

Many people will say that they prefer watching movies over TV. Development is the primary reason I disagree these people. A television series has so much more development than a movie, both in terms of characters and the plot. More often than not, a movie leaves an audience wanting more information than they'll ever get (just due to the two hour time constraint), while a TV show has multiple episodes (and seasons) to develop characters and further plot lines.

When a show is done right, it leaves viewers in anticipation of its next episode or season. The most binge-worthy serieses nowadays end each episode on a cliffhanger - making you want to immediately start the next episode. It's a formula Netflix has near-perfected.

Walking Dead is another series that viewers love to talk about for months. The cliffhanger at the end of season 6, where Negan kills a primary cast member and the audience doesn't know who - was one of the biggest cliffhangers in television history.

Ok, this one isn't specific to just television, but it definitely belongs on the list. There are characters in books and movies that just stick with everyone. However, TV characters stick with me more than any other entertainment format. It all goes back to point #4 and development. Today TV characters are really fleshed out. You learn a lot about them, their families, their personal lives and relationships - just everything. TV characters are just superior to movie characters in every way.

Some people can watch a movie over and over again, but I generally don't. Once I know how a movie ends it's really hard for me to sit down and watch it again (but there are a few exceptions). But with a television show, it's completely normal to rewatch a certain episode repeatedly. Yes, I know how it ends but in the grand scheme of the whole show, that one episode is probably just a drop in the bucket.

It's really kind of similar to re-watching movie scenes but not the whole movie. I've watched the end fight sequence in both Top Gun: Maverick and Avengers: Endgame more than a dozen times each. But I don't re-watch those movies in their entirety.

It's a given how I love TV more than the average person, but that doesn't mean that our reasons can't be the same! Let me know in the comments what your favorite TV shows are, and why you love TV.
+0

By Andrea Smith
Member Since: Aug 17, 2017
FOLLOW
Andrea Smith is a Hollywood and Entertainment writer.
COMMENTS
Log in to post a comment. (Easy one-click login with Google or Facebook)
40,000 YEAR OLD WORMS DISCOVERED BY SCIENTISTS IN RUSSIA
YOUR MOBILE APPS (AND THEIR ADVERTISING) SPY ON YOU
THE SEARCH FOR EXTRA-TERRESTRIAL INTELLIGENCE
METEOR CRASHES INTO INDIAN VILLAGE