World Calendars Past and Present 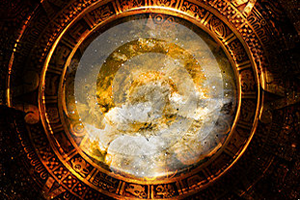 2,605 Shares
Ancient civilizations quickly became aware that knowing when the seasons would change was important to their survival. Recording the passage of time was a cornerstone of their evolution and development. As written languages began to emerge so did written calendar systems. However, recording an exact solar year and predicting the equinoxes is no easy matter. There are 365.2422 days in a solar year, more or less (this number slightly varies and changes over time). The root of the problem lies in the fact that the solar year (the time it takes for the earth to orbit the sun once) is not evenly dividable by an earth day (one revolution of the earth). Some early civilizations dealt with this problem better than others.

Most calendars track the sun (a solar calendar) or the moon (a lunar calendar). Some track both and are called lunisolar. Some are astronomical and track the stars. 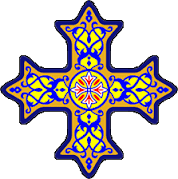 Also called the Alexandrian calendar, it is based on the ancient Egyptian calendar. There are 3 seasons, each having 4 months and 30 days. There is a 13th month that consists of 5 or 6 days (depending if it is a leap year or not).

Most historians agree that the Egyptians were the first civilization to calculate time. Using their knowledge of the stars, they divided a year into 12 months. Later, through observations of the equinoxes, they discovered the solar year. The original calendar had 12 months, each with 30 days, and a small month with 5 days making a year 365 days long. In 238 BC the calendar was modified to make the small month have 6 days every 4 years, the first use of a leap year system.

The Coptic calendar is one of the oldest known calendars. The calendar's creation is credited to Imhotep, the supreme official of King Djoser. It is used in Egypt and by the Coptic Orthodox Church. 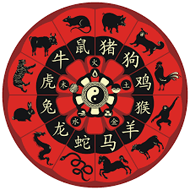 The Chinese calendar runs in 60 year cycles, each year named for one of 12 animals connected to the Chinese Zodiac. Chinese New Year falls on the new moon between January 21st and February 20th of each year. In 2018, that's February 16th and it will be the year of the dog.

The Mayans didn't invent the calendar, most civilizations in pre-Columbus Central America (including the Mayans) used the calendar. The Mayans made revisions and developed it further.

The Mayan calendar is made up of four separate calendars: the Long Count, the Tzolk'in, the Haab, and the Lords of the Night. To the Mayans time was cyclical in nature and a set number of days must occur before a new cycle can begin.

The four Mayan calendars are used simultaneously. Any Gregorian date can be converted into a Mayan date. August 5, 2017 (Gregorian) translates into the Mayan date 13.0.4.12.8 2 Lamat 6 Yaxk'in G5: 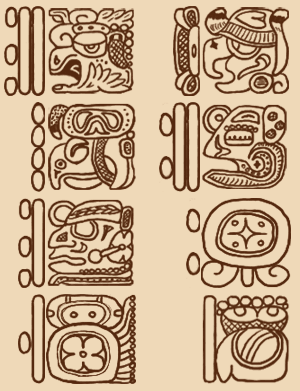 The Long Count is an astronomical calendar. It is used to track very long periods of time. The Mayans called it the universal cycle. Each cycle is 5,126 solar years. The Mayans believed the universe was destroyed and then reborn again at the start of each new cycle. This inspired numerous end of the world prophecies that coincided with the Long Count's last end, which was on December 21, 2012.

The Long Count is used to denote years, just as the the Gregorian calendar does. The Long Count starts on August 11, 3114 BC, but it is unknown why this is the starting point.

The Tzolk'in is the distribution of the days (literal translation). It is a calendar with 20 periods, each having 13 days, for a total of 260 days. Each day is numbered 1 through 13, then repeated. The entire 260 day calendar repeats after each cycle. The Tzolk'in was the religious calendar of the Mayans.

The Haab is a 365 day solar calendar that is divided into 19 months, each having 20 days except for one that only has 5 days. The Mayans didn't care about leap years, they were more concerned that time should not be interfered with and unbroken. The count of time should go on forever with continuity. The Haab was the civil calendar of the Mayans.

The Lords of the Night number nine and they form a 9 day cycle that repeats itself forever. They are deities from Mesoamerican astrology. 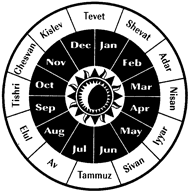 The calendar has evolved many times since its creation. It has heavy Babylonian influence. The current year represents the number of years since the world was created (according to Hebrew tradition) on October 6th, 3761 BC (Gregorian calendar date). Hebrew year 5777 began at sunset on October 2, 2016 and will end at sunset on September 20, 2017.

Dating the creation of the calendar is difficult. It was used for centuries by ancient Hebrews, the calculation method passed down from generation to generation. The first record of the name Israel is in the Merneptah stele, built for the Egyptian Pharaoh Merneptah, son of Ramses II in 1209 BC:

"Israel is laid waste and his seed is not."

Invented around 1000 BC (possibly much older), in use today. 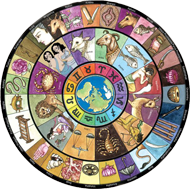 The Hindu calendar is a lunisolar calendar. The year is counted from the first year of the Saka era, in 78 AD. Religious holidays are calculated according to the positions of the sun and moon. The start of the Indian National Calendar year coincides with March 22, except in a leap year like 2020, when it coincides with March 21.

The 25,800 year cycle of precession. The current
north pole star is Polaris. In about 8,000 years it
will be Deneb. In about 12,000 years it will be Vega.
The ancient Hindu calendar is similar to the Hebrew calendar in that a leap month is added to bring the lunar year into equilibrium with the solar year. It has been in use on the Indian subcontinent since ancient times. It remains in wide use by the Hindus in India and Nepal, mostly to set Hindu festival dates.

The calendar has been revised hundreds if not thousands of times over the millennia. When Alexander the Great invaded northern India in 326 BC, Greek astrology was gradually introduced into the calendar. 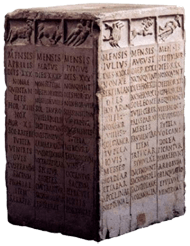 Created by King Romulus, the first king of Rome, this was a lunar calendar that had 10 months and began in Spring with March (Martius). 6 months had 30 days, 4 months had 31 days. Winter had an unassigned number of days that would change each year.

The calendar only had 304 specified days, so it didn't work well and quickly failed to align with the tropical year. King Numa Pompilius reformed the calendar around 700 BC and added January and February, which increased the calendar to 355 days.

Even with the revisions the Roman calendar was still a mess and it quickly fell out of sync with the tropical year. It was the duty of Roman priests to maintain the calendar and they failed miserably. Some of their failure was attributed to ignorance, in other cases they were bribed to make some years long and other years short. Leap years were considered unlucky in Roman culture and were avoided during times of crisis and war. 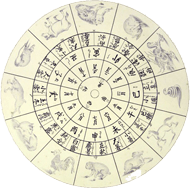 The start of this calendar marks the death of Buddha which was around 543 BC. It is a set of lunisolar calendars that is mostly used by Buddhist monks throughout the southeast Asian countries of Thailand, Cambodia, Laos, Myanmar, and Sri Lanka. However, each of these countries have minor variations of their own, such as month names and numbering.

Not all Buddhists monks follow this calendar. Tibetan monks follow a calendar that comes full cycle every 60 years. It is a variation of the Chinese calendar, with each year named after an animal and an element. 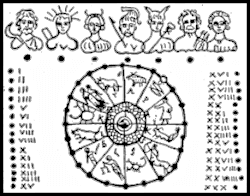 Invented by Julius Caesar, it was a reformation of the Roman calendar. The year 46 BC was changed to 445 days and is called The Year of Confusion. From 45 BC (AUC* 709) forward each year consisted of 365 days except that every fourth year was a leap year.

*Ab Urbe Condita, Latin for, "from the foundation of the City (Rome)." 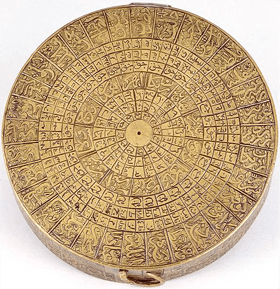 The Muslim calendar is a lunar calendar that has 12 months and 354 or 355 days. It is based on when Muhammad and his followers migrated to Mecca and built the first Muslim community (an event called the Hijra) on 622 AD.

The start of a new month is based on the observation of a new lunar cycle. The length of a month is 29 or 30 days, depending upon when the new lunar cycle is observed. As a result, the months drift backward over the seasons, beginning again on the same day every 32.5 years.

Invented around 1000 AD, in use today 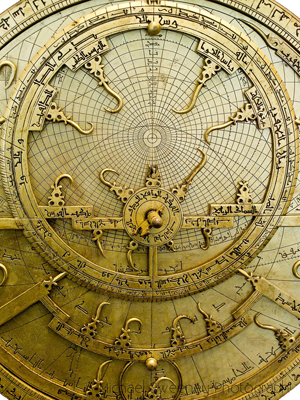 Also known as the Solar Hijri calendar, Iranian calendar, and the SH calendar. It is a solar calendar based on astronomical observations. The year begins with the midnight that is closest to the spring equinox in Iran. The first day of the new year is called Nowruz and is celebrated by Iranian people around the world.

There are no mathematical rules to determine if it is a leap year. The number of days between the each spring equinox makes this determination. Leap years are those where there are 366 days between 2 Persian New Year's days.

The Persian calendar has been the official calendar of Iran since 1925 and in Afghanistan since 1957. The modern form of this calendar was developed in the 11th century by Persian astronomers. 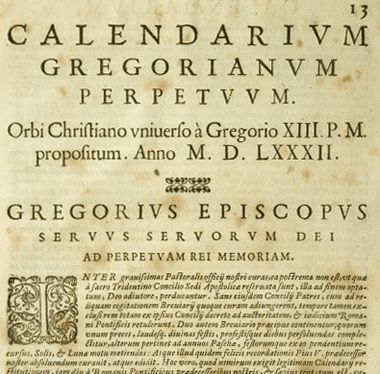 Over a period of 170 years the Gregorian calendar was slowly adopted and replaced the Julian calendar in most western countries. Catholic countries implemented it quickly, Protestant countries more slowly. Eastern Europe, the British empire, and the Americas took the longest to make the transition.

Because the Julian and Gregorian calendars were used simultaneously for a long period of western history, calendar dates during the transition period are often ambiguous, unless it is specified which calendar was being used.

The Gregorian reform modified the Julian calendar's scheme of leap years as follows: 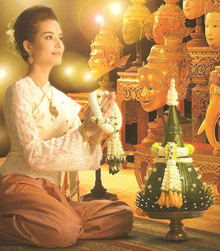 Thailand adopted the Thai Solar calendar in 1888 AD under King Chulalongkorn (Rama V). It is a Siamese version of the Gregorian calendar. It replaced the Thai lunar calendar as the legal calendar in Thailand.

Years are counted in the Buddhist Era (BE), which comes 543 years before the Christian Era. Conversion is very straightforward. Add 543 to the current Gregorian year and you have the Thai year. The names of months are derived from Hindu astrology and the signs of the zodiac. Aside from the year number and the names of the months, the Thai solar calendar is closely equivalent to the Gregorian calendar.

By CT Thompson
Member Since: Jan 06, 2016
FOLLOW
Founder and editor-in-chief of Way Universe.
COMMENTS
Log in to post a comment. (Easy one-click login with Google or Facebook)
WHAT REALLY HAPPENED IN CHARLOTTESVILLE VIRGINIA
GEORGE CLOONEY TURNED HIS 14 CLOSEST FRIENDS INTO MILLIONAIRES
VAMPIRE: THE REQUIEM
INTERVIEW WITH THE VAMPIRE IS A TIMELESS CLASSIC