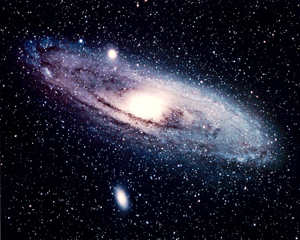 In August the Andromeda galaxy will move into view for most inhabitants of the northern hemisphere. Often referred to as M31, Andromeda is the closest major galaxy to our own Milky Way. Andromeda is a spiral galaxy and it is very close to our own galaxy's shape and size.

To locate Andromeda, look to the northeast just after sunset. You will need a very dark clear sky and preferably a new moon. The galaxy looks like a dim haze of lights, larger in diameter than a full moon.

Andromeda is one of over 30 galaxies that make up our local group. These galaxies are spread out and have approximately a 10 million light year diameter. The group's center is thought to be somewhere between the Milky Way and Andromeda. These two galaxies are by far the most massive of the local group. Their strong gravity acts upon smaller surrounding galaxies and the result is an accumulated system of satellite galaxies.

With the sheer size of our known universe, the possibility of life beyond our own planet is astonishing. The Milky Way alone is estimated to have between 100 and 400 billion stars. Multiply this by the millions (if not billions) of other galaxies in the universe and it's hard for any person to truly grasp the size and dimension of our universe. New planets are being found every day. It's only a matter of time until life beyond our own planet is found.

In the northern hemisphere August and September are the best months to view Andromeda. The best viewing months in the southern hemisphere are October through December. It can be seen with the naked eye, but with just a pair of binoculars the the beautiful details of Andromeda begin to emerge.

By Michael Ramses
Member Since: Jul 20, 2017
FOLLOW
I love to write about the strange, unusual, and paranormal.
COMMENTS
Log in to post a comment. (Easy one-click login with Google or Facebook)
10 SEX SYMBOLS WHO FELL FROM GRACE
WHEN WILL WE GET A BITCOIN ETF?
CREEPY LITTLE STORIES
WILL MICROSOFT START CHARGING A MONTHLY FEE FOR WINDOWS 10?