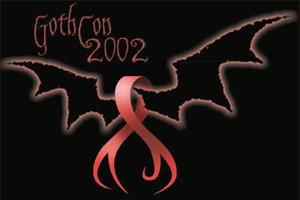 Atlanta, Georgia is the home of the Braves, Ted Turner, and Coca-Cola. It has had a tumultuous history, not only owing to it's destruction and reconstruction during the Civil War, but it is where Rev. Martin Luther King, Jr. was born, made his famous speeches, and is buried. Many cultures and sub-cultures, often in opposition, fight and thrive in Atlanta. It is a land full of polar opposites.

This Halloween weekend, Atlanta is set to play host to the fourth annual GothCon convention celebrating that culture (sub, counter or otherwise) known as "Goth". Just as Atlanta is no stranger to explosive confrontations, neither is Sara Sieber, the director of GothCon, whose staff members find themselves embroiled in their own nasty battle.

Though it started in Atlanta, GothCon had hosted from the Goth mecca of New Orleans the last two years, and is back home in Atlanta this year. From its inception, it served not only as an opportunity for the Goth community to come together and enjoy that experience which makes it unique, but it had noble intentions as well.

Sarah, whose friends know her by her nickname and online handle, "Snow Elizabeth", lost two friends to AIDS; a personal subject to her to say the least. But this encouraged her to try to set up a non-profit charitable event from which part of the proceeds would help some local AIDS-related groups.

The sole confirmable benefactor of GothCon 2002 was Project Lazarus who operates Lazarus House in New Orleans. Project Lazarus provides a residence and hospice for men and women with various stages of AIDS who are no longer able to live independently. I myself have spoken with their Assistant Director and they confirmed that they did receive a donation in December of 2002.

It was a memorable occurrence for them because they were in the middle of a holiday event when the check was dropped off in the amount of $500.00. A hand-written receipt records the unexpected donation, which is now infamous for its conspicuously unprofessional nature. It took Project Lazarus by surprise because of the timing, and now they are constantly receiving calls from people like me who want to confirm the donation.

So at least as far as GothCon 2002 is concerned, they made at least a $500.00 profit and donated that much to a charity. That charity is on record as having received the donation, and did also confirm that the check was cashed.

So what happened to the donations that were to have been made in 2000 and 2001? This is the very question that former GothCon staff and volunteers as well as former attendees want answered.

Many of them have come together to get to the bottom of this and encourage Sara to prove her case that money was donated or admit her failure to donate. They are also banding together to put the word out on the Internet to as to why they plan to boycott GothCon 2003. One thing is sure; Sara certainly didn't expect a kind of Spanish Inquisition.


THE GOTHCON INQUISITION
"NOBODY expects the Spanish Inquisition! Amongst our weaponry are such diverse elements as: fear, surprise, ruthless efficiency, an almost fanatical devotion to the Pope… and nice red uniforms - Oh damn!"
- Cardinal Biggles, Monty Python's Flying Circus

There is a LiveJournal blog dedicated to the selfnamed GothCon Inquisition. In addition to this, the former gothcon.com website is now the home of the GothCon 2003 Boycott website. The former Webmaster, whose company still owns the domain name, has turned it against the unsuspecting convention promoters. Anyone who wanted to visit the original website they knew from previous years, will now find a website lobbying against the convention. The domain name was meant to be a donation, but since GothCon is not a valid non-profit organization, the original ownership is still intact.

People who attended GothCon in the past did it for many reasons. Certainly at the top of the list was the opportunity to enjoy a convention. But for others they were glad to see the convention making a donation to a worthy cause. For those people, they believed it when the original GothCon website made the following claim:


"GothCon Is A Non-Profit Organization. A Portion Of The Proceeds Will Go To Assist Those Who Suffer From AIDS And HIV."

The key phrases here are "non-profit" and "a portion of the proceeds". Both of these satisfied anyone who realized that they were announcing their intentions to make some donation of their profits to some charities. This certainly satisfied me at first when I realized that perhaps they were only able to make a donation to one charity - Project Lazarus. But the fact of the matter is that GothCon was never registered as an organization, let alone a nonprofit one.

When the GCI challenged Sara about this issue, her response on March 27, 2003, in her own LiveJournal (http://www.livejournal.com/users/000100010001/8803.html?thread=11619#t11619), was that "Gothcon was/ is non-profit, and gothcon is an event not a company. New Orleans only required of us an event permit. I would only need non-profit status if the revenue would exceed 25,000 or more. This is what I was told by the state and was confirmed by our new accountant, A&S Financial. We tried to file for non-profit and were denied because we are only a once a year event and gothcon is not a company."

What does all this mean? GothCon made an incorrect claim on their own website in 2000. Sara could have easily said the event was to be non-profit, meaning she intended to make a donation. But that is simply not what she did. Instead she implied her organization, in this case Seraphim Productions, was a non-profit organization, bound federally by IRS regulations. 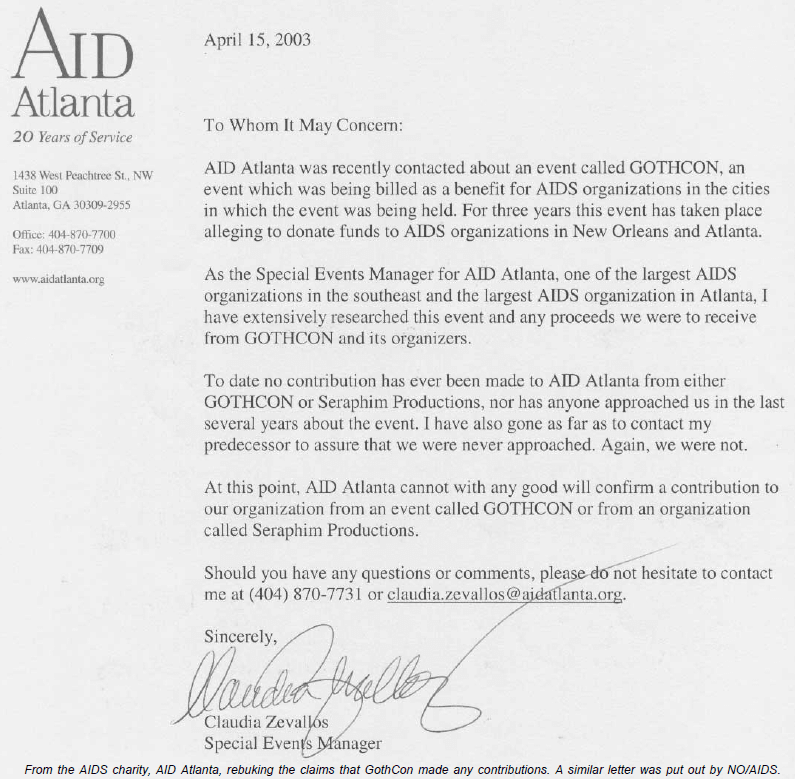 After this, I dug deeper, into the same web archive, and came across this cost analysis breakdown of what they claimed to have donated and why.

A breakdown of the cost of the 2002 event and the amount donated to NOAIDS Task Force.

Thank you to everyone who attended the event and we hope all of you will come back in 2002 and bring a few friends with you! We want to double this amount next year!

This breakdown is either flawed, confused, or I've lost my ability to solve word problems. GothCon claimed that they incurred costs of $19956.00, but had an income of $18500.00. This alone comes out to a negative of $1456.00. Are they claiming then that the NO/AIDS donation is included as an incurred cost, and if so, why is it not in their quick list of costs? What about the sponsor donations? Is this just a breakout of the "income" or is this credited as additional income? This page just suffers from too many mistakes, intentionally misleading or not.

At first glance, this appears to detail the costs and donations from 2002. Despite the failed attempt to explain how they came up with this amount, there are two other problems. First, there's no mention of money donated to Project Lazarus. Second and more damaging, NO/AIDS reported to ACT-UP Atlanta that they never received any money from GothCon.

A careful examination of the context of the rest of the breakdown page shows that this was the tally and donations for GothCon 2001, not 2002. The website was setup for announcing GothCon 2002, so the beginning sentence claiming breakdown of "2002" is yet another mistake. (This was confirmed by The Wayback Machine itself; the URL includes the archive folder of "20010803031700" which is a timestamp of the date August 3, 2001 at 03:17:00 AM.)

This explains why there is no reference to Project Lazarus. However that breakdown page only claims a donation was made to NO/AIDS Task Force, not to AID Atlanta. This owes to the fact that AID Atlanta was to be the main recipient of GothCon 2000, which I cannot find files for. But, again reading their breakdown note, they claim they donated more than $1100 more in 2001 than they did in 2000, i.e. to AID Atlanta. Quick math gives the estimate that AID Atlanta should have received about $356.00. The Boycott website has two letters from NO/AIDS Task Force and AID Atlanta that explain that no money was ever received from GothCon. So, where did these donations go? Was the money intended to be donated, but it never materialized? Sara's answers to this in the past are so contradictory in nature, that I was hoping to contact her myself and find out what happened. To date, she has not been available for comment.


So what does the future hold for GothCon? If it goes on as planned at the end of October, the boycotters are planning to picket outside of the hotel it will be held at. Their goal is not to prevent people from going to GothCon, but to make them aware of the history of the event. They have asked their questions and not gotten satisfactory answers.

Saying that however, the former Webmaster does have one goal - to prevent the name of GothCon from being used. Not only does she still own the domain, she also just recently secured a registered trademark on the name GothCon.

Rumors of harassment by both sides are causing the issue to spin out of control, and no spin doctor seems to be able to put out this fire yet. I myself have tried to keep an open mind and hear both sides. The people I interviewed on both fronts are sore to be sure at the other side. It doesn't take much to turn an Inquisition into a witch hunt. The Inquisition knows no donations were received by two charities. Finally admitting what happened is probably the only thing that will stop this chaos. Life is all about drama, but in a town nicknamed Hotlanta, you are bound to find more than your share.

By Dan Shaurette
Member Since: Jul 25, 2017
FOLLOW
Author of Lilith's Love, Black Magic, and Once Upon a Scream.
COMMENTS
Log in to post a comment. (Easy one-click login with Google or Facebook)
TOSSED TO THE VAMPIRES
INTERVIEW WITH THE VAMPIRE IS A TIMELESS CLASSIC
TEACHINGS OF THE MAJOR RELIGIONS
WORLD CALENDARS PAST AND PRESENT