The Wheel of the Year 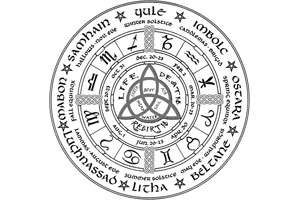 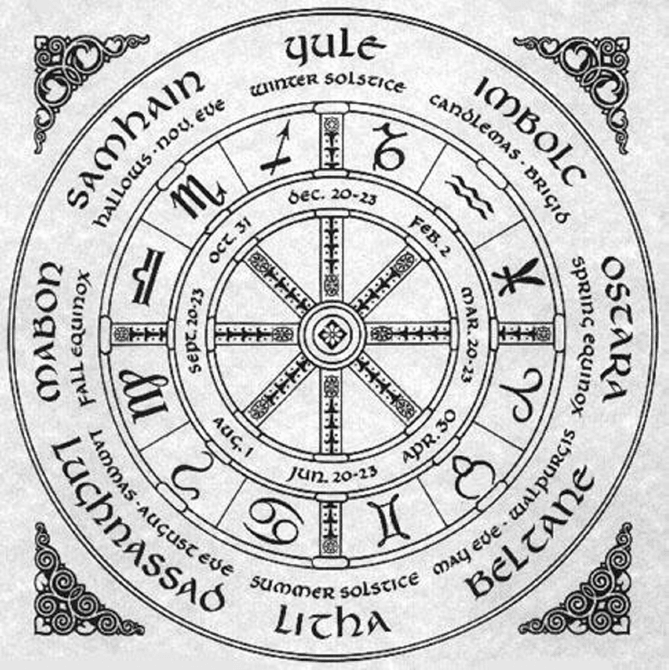 As the wheel turns, pagans celebrate the four seasons as solar festivals. Halfway between each season is a fire festival, usually associated with agriculture and the harvest. Together they make up the eight holy days, or Sabbats (also sometimes called Asatru Blots).

Celebrations and festivals that match these time periods is common throughout many cultures in the world.

Ever since the stone ages, the winter solstice has been regarded as a significant turning point in the annual solar cycle. The ancient archaeological sites of Newgrange and Stonehenge are aligned with the winter solstice's sunrise and sunset. The festival represents the turning point of winter and the longest night of the year. The sun begins climbing higher and higher in the sky each day after Yule, marking the return of the solar god and the coming of the planting season.

The first fire festival of the year falls around February first. The festival marks the first stirrings of spring. The ices begin to melt and the ground will soon become plantable. It is a time of spring cleaning and purification, through both ritual and deeds. Wiccans make pledges and dedications for the remainder of the year on this fire holiday.

Claimed by the Christians as Easter, this much older solar festival marks the midpoint of spring. Ostara is a Saxon goddess of springtime and the dawn. It is a time of fertility, arrival of babies (human and animal), and new growth. The rabbit, known for its rapid reproduction (later bastardized as the Easter Bunny), was Ostara's sacred animal and used at festival time to honor Ostara for her gift of fertility and abundance.

The first day of summer in Ireland. In ancient Rome it was celebrated as the fire festival of Flora (the Roman goddess of flowers). Germanic tribes celebrated this time as Walpurgis Night. Beltane is a festival of fertility and light.

After Europe became Christianized, this fire festival transformed into maypole dancing and the crowning of the Queen of the May on May Day.

At the opposite of Yule is Litha, the longest day (and shortest night) of the year. Summer reaches its maximum. The name Litha can be traced to one of the original Saxon months and roughly corresponds to modern-day June or July. It is a time of rest. The harvest will be coming soon and will require all of your energy.

Newgrange and Stonehenge also mark the time of Litha. Ancient cultures celebrated by fire. Torchlight processions were common at night. Fire was used to drive out evil and bring fertility.

The first of three Wiccan harvest festivals, Wiccans celebrate this fire festival by baking a figure of god in bread and eating it. The ritual symbolizes the importance and sanctity of the coming harvest. Celtics call the holiday Lughnasadh (in honor of the Celtic deity Lugh) and Wiccans call it Lammas (translated literally: loaf mass). Early Wiccan manuscripts refer to the holiday as August Eve.

The second of three Wiccan harvest festivals, this fire festival has many names: Mabon (from Welsh mythology), the Feast of the Ingathering, Harvest Home, and Meán Fómhair or Alban Elfed (in Neo-Druid traditions). Pagans give thanks to mother earth for her bounty. Her gifts will allow Pagans to survive the coming cold winter months.

The final Wiccan harvest festival, Samhain is consider to be one of the greater Sabbats. It is a time to honor your ancestors and loved ones that have passed on. It is considered to be a festival of darkness, directly in opposition to Beltane which is a festival of fertility and light.

Pagans believe that during Samhain the veil between life and the afterlife is at its most thin. During this time it is easier to commune with the dead. 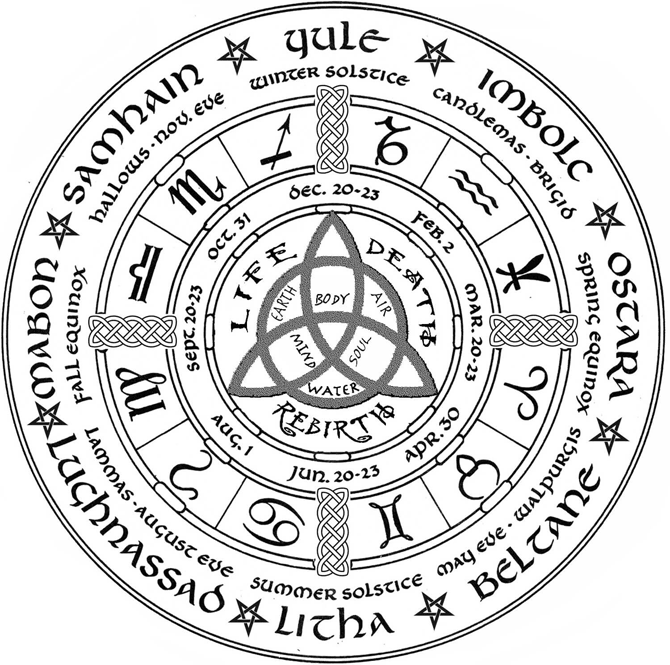 By Michael Ramses
Member Since: Jul 20, 2017
FOLLOW
I love to write about the strange, unusual, and paranormal.
COMMENTS
Log in to post a comment. (Easy one-click login with Google or Facebook)
WHAT REALLY HAPPENED IN CHARLOTTESVILLE VIRGINIA
GOTHCON: BEATING A DEAD HORSE
ONLINE DATING SCAMS
NEW DEEP SPACE IMAGES FROM HUBBLE SHOWS 15,000 GALAXIES