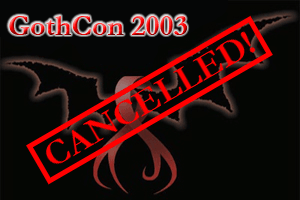 2,256 Shares
As an update for the readership that has been following the brouhaha surrounding the GothCon convention in Atlanta this Halloween weekend, I have to report that much of the fighting remained constant until the beginning of October. Suddenly, almost as if the life breath was choked from the pro-GothCon communities, the messages stopped. Perhaps they were instead holding their collective breaths. When I visited the official site for the convention, www.GothCon.org, for updates (which were slow to make announcements before now) I found the following note from the organizer, Sarah Sieber aka Snow Elizabeth.


"Due to reasons beyond our control GothCon 2003 has been cancelled. According to the venue someone claiming to be staff called them to report the event had been cancelled. We just recently recieved (sic) a letter from them stating they had cancelled the event due to this information. We have been unable to obtain another venue and will unfortuanately (sic) have to cancel the whole event. We deeply apologize for the inconveniance (sic) and all tickets and ad sales have already been refunded."

Snow Elizabeth
Without blaming any one person or group, she is claiming that someone falsely cancelled the hotel's convention center out from underneath her. Whether this is true or not is irrelevant. Whether it is likely that a hotel would so easily cancel a large event without speaking directly with the hostess is moot. Personally I wouldn't deal with a hotel that would so easily make such an error, but who knows how convincing the caller was. This was but one more damaging blow to the event, which seemed pained to get entertainment booked, or at least announced, among other troubles.

In the end, it seems the event was doomed to fail. How much the "GothCon Inquisition" had to do with it being cancelled, we will also never know. The GCI's LiveJournal is still active, or at least, more active that those on the GothCon side. Members have expressed their desire to make donations to charities instead of to GothCon, so perhaps they may get some benefit after all. But no one has come out claiming victory, nor being outwardly defensive of dealing the deadly stroke.

Sarah Sieber and her staff are not the losers in this battle, nor are the charities. Those who have lost are the people who bought tickets and planned to attend. It's good that their admissions have been refunded. Sure, there will be other events, masquerade balls, concerts, etc., in Atlanta and abroad. Had the event proceeded, perhaps the attendees may have again been reminded of the history of the event. But now their plans for having a good time despite the strife and reveling in their unique identities are dead.

The journals and forums will surely pick up again, the accusations will fly anew, and the drama may never die; such is the nature of undead things. If it does continue, it will all be party to beating a dead horse.

As a side note, I did finally hear from Sarah. She never responded to the email I sent to her on August 2nd. That email was the same that I sent to everyone whose email address was linked to the GothCon site, and was also the same that I sent to the Inquisition founders. I heard from everyone I sent that mail to except for her. I had heard from those close to her that she was unable to get to a computer, but that my questions would be given to her as a printout. In my final draft of the article that was published in Acrimony, however, I stated that I was unable to reach her for comment.

Funny, September 3rd, shortly after the issue was published, I received an email from Sarah. She claimed she never received my email and accused me of failing to get all of the facts. I would like to take this moment to again say I'm sorry to hear that she did not receive my initial request for an interview, nor my follow-up of questions that were given to her and her associate. I responded to her email with my apologies and asked her if she had any comments or would accept a proper interview. She has yet to respond. For the record, I invite her again publicly to please feel free to write to me if she wishes to finally set the facts straight; about anything written in my article or this follow-up, specifically about why the event was inevitably cancelled.

As the founders of the Inquisition can attest, my initial draft was written before hearing from them as well. When I wrote to them letting them know I was running out of time, they contacted me, I made myself available by phone, and included their say in the article's final draft which was rushed to the Editor. I made the same declaration to Sarah's friend. To date, I am still waiting to hear back from Sarah. Then again, perhaps by now, even she is tired of beating this dead horse.

By Dan Shaurette
Member Since: Jul 25, 2017
FOLLOW
Author of Lilith's Love, Black Magic, and Once Upon a Scream.
COMMENTS
Log in to post a comment. (Easy one-click login with Google or Facebook)
PARANORMAL, MYTH, OR HOAX?
ONE LOAF BREAD
MORE STAR TREK SHOWS FROM CBS ARE ON THE WAY
QUENTIN TARANTINO IS IN NO HURRY TO MAKE HIS FINAL MOVIE