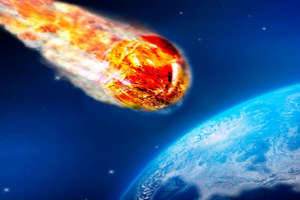 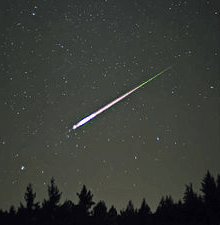 Two people were injured and several homes badly damaged when a meteor came crashing down out of the sky and struck a small village in eastern India. The meteor touched down just after sunset. Witnesses reported a large fireball illuminating the evening sky, which caused panic among many of the local residents.

Additional reports from surrounding areas described a thunderous noise that cracked and shattered several windows as the meteor broke up in the atmosphere during its decent. One of these fragments came down in the Mayurbhanj district and set several homes ablaze. Further reports in a neighboring village stated that other fragments were responsible for at least one more house fire, although these reports could not be confirmed.

Government officials are scourging the countryside looking for additional fragments. They are asking citizens not to pick up suspected meteorites.

Meteorites are a valuable commodity. They often sell on eBay for a few hundred to a few thousand dollars. Very large meteorite's go for extraordinary prices.

On an average day, hundreds of objects collide with the Earth's atmosphere. Known as shooting stars by ordinary people, these objects are actually meteors. Traveling at over 10,000 kilometers per hour, all but a very few burn up in Earth's atmosphere before they make contact with Earth's surface.

By Michael Ramses
Member Since: Jul 20, 2017
FOLLOW
I love to write about the strange, unusual, and paranormal.
COMMENTS
Log in to post a comment. (Easy one-click login with Google or Facebook)
10 SEX SYMBOLS WHO FELL FROM GRACE
CHINA TELLS TRUMP: NORTH KOREA NUCLEAR CRISIS NEEDS A PEACEFUL RESOLUTION
THE WHEEL OF THE YEAR
WHAT REALLY HAPPENED IN CHARLOTTESVILLE VIRGINIA