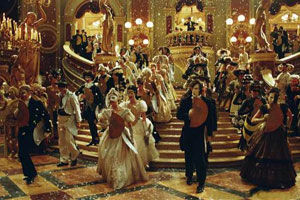 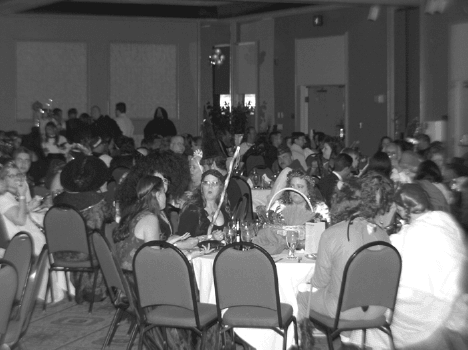 Attendees of the Witches Ball at the Crown Plaza Hotel
It had been several years since Phoenix, Arizona hosted a Witches Ball. Balls in the eighties and nineties did well in Arizona, but in recent years attendance declined sharply at similar events due mostly to infighting within the Arizona Pagan community. 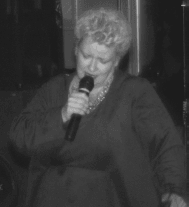 Vocalist Barbara Brown
I was pleasantly surprised to see almost 400 people in attendance. I was expecting far fewer, somewhere in the range of 150. The ball was held at the luxurious Crown Plaza Hotel and the $35 per person ticket included dinner, dancing, and entertainment.

The evening started a little late, but that is nothing new to these events. Crowd members joke about the organizers being on PST (Pagan Standard Time) and that everything will be running 20 to 30 minutes behind. After everyone settles into the hall, Barbara Brown takes the stage and opens the evening. Her vocal talent is immense and it is a pleasure to listen to her sing as we wait on our waitress. 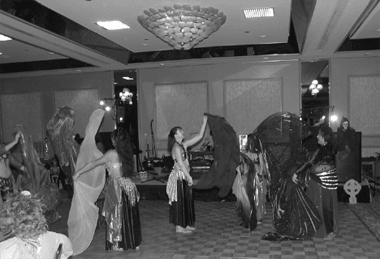 Egyptian Cartouche
There were only 2 choices for dinner, Chicken Asiago or Pasta Santa Fe (a vegetarian dish). I opted for the chicken. Drinks weren't included with dinner and that perturbed me more than a little. Drinks at the bar were $4.

The meal was fine, or at least it wasn't bad. I was expecting a little bit better. By this point the belly dance troupe Egyptian Cartouche had taken the stage. They were very fun to watch. A good belly dance performance is always a treat.

The final entertainment act was the Phoenix band Reliquary. I had never heard this group before but after they were onstage I recognized two of the band members: Loki and Surreal from another Phoenix band Paris Burning. Later investigation revealed these two have several projects and like to keep themselves busy.

Reliquary was good, very gothic in tone and lyric. Kara fit the gothic bill and my only criticism is that she had very little stage presence. She moved very little from her position behind the microphone.

Reliquary
It has now been about an hour since I have finished dinner. Looking relentlessly for a waiter to no avail, I finally find one and order a cup of coffee. A DJ takes the stage over and dance music begins.

I was disappointed in the lack of ceremony and ritual. I was expecting far more from a Samhain event. The evening had been promoted in the following manner:


It is our goal to provide an elegant event and celebration of Samhain for Arizona Pagans, Practitioners of Magick and those walking the Old Path. We hope to honor the Ancestors through the spiritual celebration of Samhain while also providing dinner and entertainment. We are committed to do this at an affordable price for those attending in a non-profit support of the Pagan community.

I didn't feel the organizers lived up to that promise. Dinner was okay. The stage performers were a little better. The DJ music was poor. There was nothing ceremonial about the evening. My group grew tired and we left early.

Based on the turnout at this year's event, I am confident there will be another ball next year. Hopefully the organizers will build on what they did this year and create a better overall event.

All Photos by CT Thompson