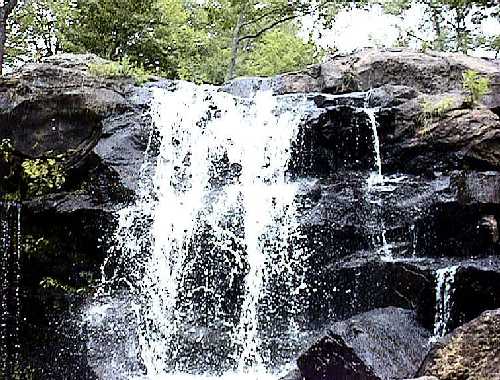 2,481 Shares
A short forty minute drive from a well known submarine base in Groton, Connecticut exists a park with a rather questionable history. Devil's Hopyard State Park in East Haddam, Connecticut is a place of summer fun for those who are unaware of the past that is hidden by the lush landscape. Most go there for a picnic or a night out beneath the stars while camping. Two years ago a group called Entity Seekers ventured out to investigate the paranormal occurrences and reports. I was a member of that group. 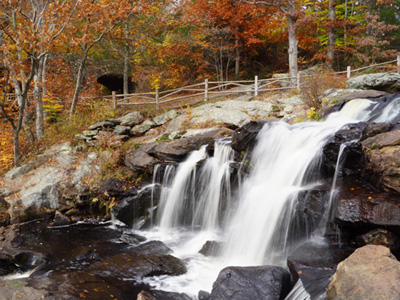 Devil's Falls in Devil's Hopyard State Park
Upon arriving at Devil's Hopyard, we found a sign that listed several of the parks legends. The most common legends involve the prince of darkness himself. Supposedly he was walking along a stream when he came to Chapman's Falls. There he stopped and got his tail wet. In his anger he stormed off leaving deep hoof prints in the rocks below. Yet another legend portrays him as a violin player. His music accompanies the evil witches of East Haddam as they stir their wicked brews in their cauldron-like holes in the rocks. Still another tale tells of a Native American tribe that performed "blood rituals" at the falls causing the water to flow red like blood. Truth be told, the deep holes in the rocks that line the bottom of the falls have a simple geological explanation. Stones that were pulled downstream by the waters current formed the holes. Later they were trapped in an eddy where the stones were spun. This wearing motion left depressions in the rocks. When a rock became worn down, another would catch in the same hole and enlarge it. Though the odd formations have been found to have a logical explanation, paranormal events have been reported there for nearly 100 years.

Entity Seekers (www.entityseekers.com) wanted to conduct a paranormal investigation of the site. We mingled around the parks trails until dark. Armed with cameras, camcorders, EMF (electro-magnetic field) meter, and our senses we set off on a small jaunt around the falls. It seemed the closer to the falls we were the more eerie of a feeling we received. We carefully made our way down to a covered bridge, snapping shots in particularly creepy areas. As we entered the bridge area, a member of the group sensed something swirling around his neck. The sensation became stronger as he neared the center of the bridge. The EMF meter detected sporadic surges in the area. We stayed for a short while then made our way back. Along the path, I felt as though my breath was suddenly taken away and an all-encompassing cold feeling had engulfed my body. The feeling was short, but it was clear and real. When we arrived back at our vehicles we stopped to take some readings near the entry to the parking area. The readings were higher than most areas we had been in before. We sat there for a little while longer and took some photos. The empathic person in the group was sure he could feel "something".

Overall the night was not completely uneventful. There was some sort of paranormal activity in the park that night. The photographs that we took revealed some interesting things. Photos of the bridge when developed revealed small orb lights that we did not see while there.

Is the park properly named Devil's Hopyard? Well, that I don't know. Perhaps it should be renamed Paranormal Playground.