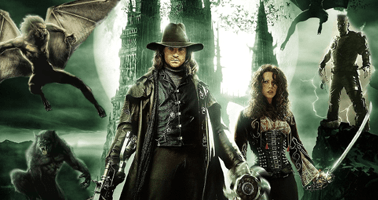 This movie was hard to review, quite simply because it has everything I love to hate about Hollywood. I suppose I shall begin with my list of hated elements and then end with the better parts. Because, I really did like the movie, even though I feel guilty saying so.

First and foremost, it violates one of my greatest vampire movie tenets: Thou shalt not use the name of Dracula in vein… ahem, vain. Sorry. Dracula is a sacred thing as far as I’m concerned. I cringe whenever I find a new interpretation of the legendary Romanian count. Few movies have done Stoker’s novel justice. Most tales with the Dracula name abuse it. This movie is one of those. The first time I saw a poster for Van Helsing, I shouted “blasphemy!”

It’s no surprise this movie pits Van Helsing against Dracula. You see one name you naturally expect the other. Sadly, neither character resembles their namesakes. The movie is set in 1889 and spends most of the time in Transylvania, but begins in Paris and moves to Rome before getting to the inevitable Eastern European destination.

Van Helsing (we do not even learn his first name) is more of a Victorian bounty hunter, reminiscent of a Dirty Harry brute force hero. A mysterious man, dressed in black leather, in need of a shave, that sadly has no recollection of his past. This makes him useful to a secret Vatican agency that has fought against the scourge of evil monsters for centuries.

The second offense this movie has committed is another big one I call “The Original Sin”, i.e., there are no more original ideas. This movie borrowed directly from “The League of Extraordinary Gentlemen”, “Underworld”, and even “X-Men”. But worse than just borrowing their ideas, they actually borrowed their cast!

From “League”, they stole the idea of getting Victorian age fictional characters together for a great adventure. Two of my favorites from that movie were Dr. Jekyll/Mr. Hyde and Mina Harker. As it happens, Mr. Hyde is the first of the monsters Van Helsing tracks down. Mina may not be in this movie, but her sire is, the infamous Count Dracula himself. From the casting couch, Richard Roxburgh, who played “M” in “League”, plays the role of Dracula. I’d also like to point out that he played the Duke in “Moulin Rouge”, which is a favorite movie of mine for it’s rich and extravagant settings and costumes – and again this seemed to have been an influence for this movie. 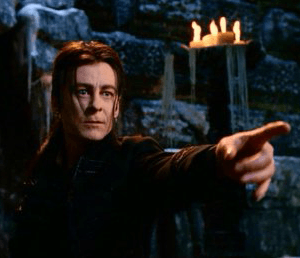 From Underworld they borrowed they idea that werewolves and vampires are deadly to each other. From the cast, they borrowed the beautiful Kate Beckinsale, but instead of the raven-haired vampiress heroine Selene, in this movie she is a raven-haired gypsy heroine, last of her family, who is sworn to destroy Dracula. Great costume work for her, but maybe I’m just a sucker for corsets and thick gypsy accents.

In the lead role as Van Helsing is the rugged Hugh Jackman, who fit the role of Wolverine like a tight yellow glove in “X-Men”. Besides being, in my opinion, the true hero of the X-Men comic/movie series, he has certain famous traits. Besides the Adamantine claws and healing powers, Wolverine is cursed with not remembering his past and he’s a mutant shunned by humanity. As Van Helsing, he begins the movie without his memories, but while ironically working to kill the non-human monsters, he later comes to understand how they feel.

The third strike in my opinion is the fact that it is a typical action/horror movie that pits the Catholic heroes against the stereotypical fiends of darkness. I guess the Holy Church needs all the propaganda it can get right now. This is merely a personal gripe of mine. I’d thought we’d gotten past the Good vs. Evil stereotypes. The three movies I believe they borrowed from all exhibited this, but perhaps this is the backlash that is to be expected.

This movie had potential and lost it, gained it back, and then lost it again. Yet amazingly, by the time the movie was over, I still enjoyed it. First of all, I am a big fan of the classic Universal horror movies, especially Bela Lugosi’s famous Dracula. Lugosi’s real accent, suave yet mysterious demeanor, and maddening stare all give us our primary image of Count Dracula. Many other imitators have come and gone, but none will be the same. The same can be said for the Wolfman and Frankenstein, though one looks back at them more with humor. But as the holy trinity of Hollywood’s monsters, they’ve left their mark on our culture.

This is exactly what makes the story of Van Helsing interesting. As the movie opens, it shifts to black and white and pays proper homage to their lineage. Universal executives no doubt have many marketing plans in the works for this, but I digress. As it begins we find Dr. Frankenstein at the moment when he finally reanimates his creation. But suddenly Count Dracula appears and it seems that the big bad vampire has plans for Frankenstein’s monster. But when the angry villagers disrupt things, and Dracula kills the good doctor, the monster takes off with his creator’s body and runs away, to his own fiery demise.

I found this to be an interesting twist, connecting the two stories. I also found it refreshing that Dracula was not the usual Lugosi-clone I’ve come to expect. The saving grace of this entire movie was Richard Roxburgh’s amazing portrayal of the infamous vampire. He had the mannerisms of the best Draculas I’ve seen and none of the typical quirks of the worst. He was maniacal and evil, sure, but you’ve got to admire that when it is played right.

Another tradition for this movie was Dracula’s three brides. This was another place where this movie did surprise me, as they were not depicted as the usual insatiable seductresses of past Drac-flicks. Each was unique and had their own shining moments even if they did start off as cackling fiends.

The same cannot be said for Hugh Jackman, whose Van Helsing is anything but the typical wise and learned Dr. Abraham Van Helsing we have come to expect. This was an action hero, a good one, but at best that’s all he is. There’s melodrama and a plot which helps to mold the character, but he never succeeds in shedding the image.

What this movie does do best is the crux of the story – the mysterious reason why Dracula needed Dr. Frankenstein’s help. I won’t spoil it for you, but it ties in the werewolves also in a neat way. I’ll say this, they buried one original idea smack dab in the middle of all of the rest of the borrowed ideas, special effects and CGI. Ah yes, the graphics. This movie is full of it and it sticks out like a sore thumb. It almost depends too heavily on it, but frankly any movie which has characters morphing from one thing to another usually will. But this was thick with it, unlike “Underworld” for example where when it was done, it was seamless and natural. 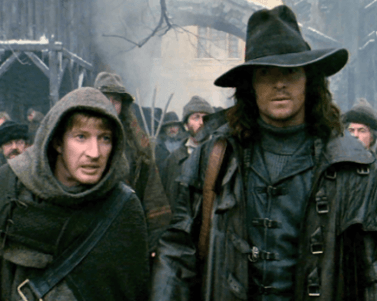 David Wenham as Carl the Friar with Van Helsing.

There was one character who should have had a larger role in the movie, and was sadly relegated to the sidekick/exposition character. Carl the Friar, played by David Wenham, had a few great lines, and served his purpose well as sidekick. He’s also the scientist character in this movie – which ironically should have been Dr. Van Helsing’s place. He works for the same Vatican order as Van Helsing, but is essentially the gadget and background information provider. He lets Van Helsing know what he’ll need when he faces Dracula: garlic, crosses, holy water, and a kickass automatic crossbow. Oh yeah, and this ball he doesn’t know if it might be handy… sort of a portable yet powerful light source, bright as sunlight, hmmm.

Van Helsing realizes he may be useful traveling with him, which is a good move. The Friar’s best line in the movie is after the light-device is used to dispatch a large number of vamps at once (like the UV mine in Blade 2), Van Helsing remarks, “You’re a genius!” To which Carl replies, “Yes, a genius with access to volatile chemicals.” Did I admire this character the most because he essentially WAS the Van Helsing character placed second fiddle or lower to the tragic action hero? Maybe, or maybe because he got all the cute, funny lines and set-ups, like the fact that he wasn’t a monk so he could cuss and more.

Visually, this movie was amazing. Truly a sweeping action adventure and horror movie that most people will enjoy. But goth nitpickers be warned, the stereotypes are many, and the legends of Van Helsing and Dracula are twisted in new, heretical ways. This movie would have been better if it didn’t call its evil vampire (Count Vladislaus) Dracula, nor name the action hero Van Helsing. But then, they wouldn’t be able to tie in Frankenstein and the werewolves to give Universal Studios theme parks a new ride.

I gave it three moons because it is a kick-ass action movie, with good scares, good acting, and a decent soundtrack (good gothic mood music), and one great original idea. It lost two points for lack of originality in most tragic ways and dependence on CGI. Save your money for the next big summer release and catch this one a little later. If you do go to see it, stay to enjoy all of the end credits. These should have been at the beginning, they were so good.

By Dan Shaurette
Member Since: Jul 25, 2017
FOLLOW
Author of Lilith's Love, Black Magic, and Once Upon a Scream.
COMMENTS
Log in to post a comment. (Easy one-click login with Google or Facebook)
ARIZONA WITCHES BALL 2003
QUENTIN TARANTINO IS IN NO HURRY TO MAKE HIS FINAL MOVIE
IS SILVER AN ANTIBIOTIC ALTERNATIVE?
MULTI-DIMENSIONAL EXISTENCE