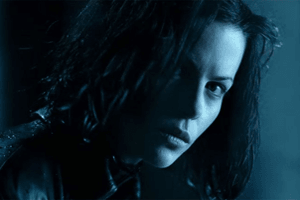 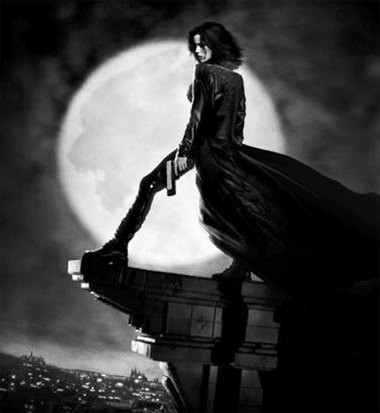 Welcome to the underworld, where vampires and werewolves (called Lycans) are waging a centuries old battle. Old wars breed ancient hatreds, and between immortal supernatural creatures it's bound to be messy, yet amazingly super-secret. In feuds like this, secret alliances are traitorous and romances are unspeakable.

First off, let me just say this is NOT a gothic Romeo and Juliet. Hell, this isn't even West Side Story. One is naturally inclined to try to compare this to Shakespeare's famous tragedy. But Shakespeare did not own the rights to the notion of star-crossed lovers of warring families.

No, this is not the Montagues and Capulets of vampire and werewolf clans. But I can imagine how that might work, "But, soft! What light through yonder window breaks? It is the east, and Juliet is the sun... oh crap! POOF!"

What this movie is, however, is a very luxurious, dark tale that is very fun to watch… so long as you aren't looking for a plot. Oh you'll find one about two-thirds of the way, but you'll get lost trying to find one until then. No, it is best to just go and enjoy the dark gothic shadows this film plays in.

For action movie fans, you'll find lots of guns blazing. This film even introduces two unique types of bullets. They are both quite clever, but almost too convenient. The Lycans created (or stole) some bullets filled with a luminescent liquid; literally firing light into the vampires. The vampires in turn steal the idea, but fill the bullets with silver nitrate to work against the beastbreed. Some action scenes seemed taken directly from Blade, or The Matrix - - but then again, who hasn't ripped off sequences from these movies.

For werewolf movie fans, you'll find some really great man-into-lycanthrope morphing scenes, and the director didn't depend on this too heavily though as if to show off. All of the special effects were well done -- unnoticeable as being CGI or other effects. It's done where necessary, and comes out quite well.

For those looking for dark, tragic romance, which we all know is the root of most devastating wars, this movie does it well without being sappy. No, it isn't the central focus of this movie either, which is good.

For vampire movie fans, well, this is where I think the movie had trouble. While there are quite a few vampires (too many almost) they aren't anything all that incredible. They are mostly stuffed shirts and peacocks lounging around having a good time. Kate Beckinsale as Selene is the outstanding exception, but even she only seems to be there to strut around in leather, shooting guns. Hey, I'm not saying it's a bad thing, just not what I expect from a vampiress. It's Kate that's sexy, not Selene.

Also, as a side note, the soundtrack is less than impressive. It's a good score and supports the movie, but there's precious little memorable music. It has none of the heart-pounding intensity of Blade or Queen of the Damned. As a music lover who buys soundtrack albums, I was disappointed. I guess Danny Elfman was too busy.

While the movie is mostly eye candy and gun play, it does get better in the last 30 minutes or so, as everything comes together, secrets are exposed, and some really kick-ass action gets underway in the climax. Another difficult thing is deciding who to root for, the vamps or the wolves. There's no defined good vs. evil in this movie, but in a way that's refreshing. What's evil here is the war itself, and not the clans themselves.

I give Underworld 3 1/2 out of 5 because it is a fun, stylish, dark movie and I will recommend it for gothic/ supernatural/action film lovers. But I like a little meat to a movie and a plot to keep me interested and I think this movie could have had that if it tried. I'll probably see it again before Halloween comes.

By Dan Shaurette
Member Since: Jul 25, 2017
FOLLOW
Author of Lilith's Love, Black Magic, and Once Upon a Scream.
COMMENTS
Log in to post a comment. (Easy one-click login with Google or Facebook)
EASY PIZZA
WHO YA GONNA CALL?
STAR WARS EPISODE IX WILL STAR CARRIE FISHER
FALLEN HALO