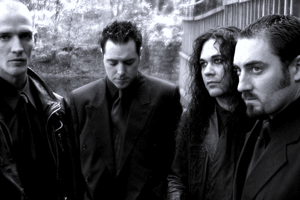 Now you may not think their work is gothic, but let me tell you... listen to the words and it'll scare the pants off of you! Blending hateful chords, powerful electronic effects and dark lyrics, Carfax Abbey is my favorite Gothic local band to date.

Recently, they've played Y- 100's Feztival 2003 along with AFI, Audioslave, CKY, and Beck, among others. The Feztival is one of Rock's biggest events in Philadelphia. Y- 100, a Philadelphia FM Rock/Alternative station, selects the best upand- coming Local stars in Philadelphia, and this year it was Carfax Abbey opening the show with some of their powerful songs.

As shown on their Web Site, "Impossible to simply label as any one style, Carfax Abbey is best described as an Intense Audio-Visual Assault".

So far, these cults of twisted fiends have released four full-length CD's, a Demo CD and countless other un-published tracks under their own independent label.

They also made a song on the CD "Music from the Succubus Club", which is provided as a soundtrack to the awesome game "Vampire: The Masquerade" by White Wolf Studios, also makers of the Hunter series of games.

Carfax Abbey is definitely a band to watch in the upcoming years, and I'm sure we'll see quite a few appearances by them in the national Rock/ Gothic scene in due time.

By Tom Scott
Member Since: Aug 07, 2017
FOLLOW
Former station manager of UndeadRadio.com.
COMMENTS
Log in to post a comment. (Easy one-click login with Google or Facebook)
WHO YA GONNA CALL?
INTERVIEW WITH THE VAMPIRE IS A TIMELESS CLASSIC
WHO HAS TIME?
ONCE IN A BLUE MOON