Tossed to the Vampires 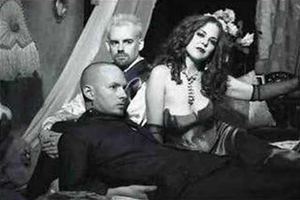 2,655 Shares
When dark pop group Darling Violetta formed in 1996, the last thing they were looking for was to be embraced by the vampire community. Two years later they performed a song on the Warner Brothers television show Buffy the Vampire Slayer and a year after that landed the theme song to the spin off series, Angel. 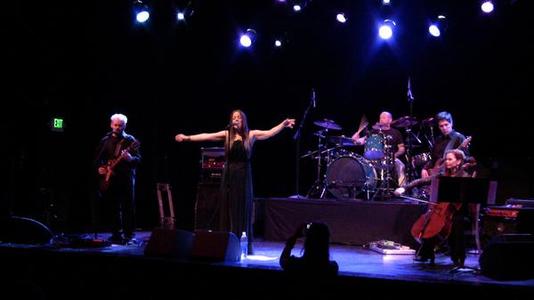 Lead singer Cami Elen met guitarist Jymm Thomas in 1995. The two performed together at local coffee houses in Los Angeles endeavoring to shape their sound and pull more members into the mix. Atto Attie (bassist) and Steve McManus (drums) soon joined the duo. All they needed was a name. 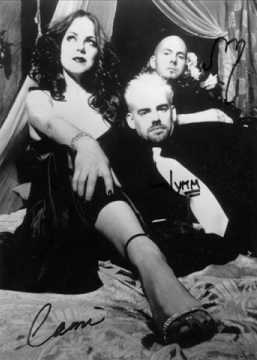 “It was a happy kind of coincidence, we actually just came up with the name … Then I went on the Internet, just kind of looking around making sure no one else had anything too similar, and the first thing that came up was this poem,” said Jymm in an interview with Vampire Radio. The poem was written by Bela Legosi and titled My Darling Violetta. It was written to an actress that he had worked with in Europe. This curious coincidence possibly sealed the bands fate as a magnet for the vampire masses. However the band was still incomplete. The quartet needed to become a quintet since Cami only did vocals.

“And then we decided that we needed some other element, and that’s when we decided, why don’t we try cello instead of second guitar,” says Cami. It didn’t take long and the band knew it had hit upon a winning combination.

In 1997 Darling Violetta released Bath Water Flowers, their first E.P. It met with warm reviews in the L.A. area but failed to push out much further. Darling Violetta needed something to help elevate their recognition.

The group shared rehearsal space with Four Star Mary, the band that supplied all of the music for the fictional Buffy group Dingoes Ate My Baby. Four Star did the songs, actors pranced around and pretended to sing on T.V. It was through this friendship that Darling Violetta met John King, music coordinator for the show. 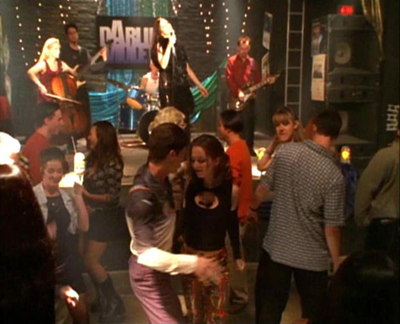 Darling Violetta in the Buffy episode "Faith, Hope & Trick"
“So we gave him a package, and then I forgot about it. About a year later, John called.” Tells Cami. The band was on. They landed a spot on Buffy the Vampire Slayer. This development introduced Darling Violetta to a new mass of people: The Bronzers. They took Darling Violetta in wholeheartedly. 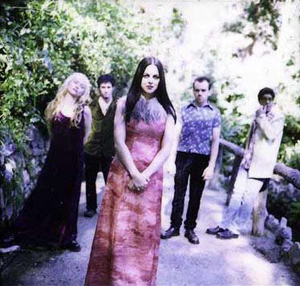 In 1999 the band scored the theme song to the Buffy spin off, Angel. This was the last nail in the coffin. Darling Violetta was now forever linked with vampires around the world.

It was time for a new album. To this point the group had only 6 tracks down on tape. The Kill You E.P. was released in January 2000 and added five new songs and two remixes to their recorded repertoire. A video for the single Spoiled and Rotten soon followed.

The new E.P. couldn’t have come at a better time. Fans of the television show Angel set out to discover its haunting creators. Darling Violetta was introduced to new audiences worldwide. College radio ate the group up alive, playing their music all over the country.

For the next two years the group played local L.A. clubs refining their style and working on new music for an eventual full-length album. In 2002 the band finally entered the studio and began laying down tracks for Parlour. It was during this period that the group said goodbye to longtime bassist Atto, who returned to Mexico to spend more time with his family. He was replaced with Chris Pott.

Parlour was released in early 2003. The album was a musical advancement for the group. It contained long-time fan favorite songs Beautiful, A Smaller God, Over You, and Candy Jones. The new tracks also placed less of an emphasis on cello, which had been up to this point, the bands trademark. 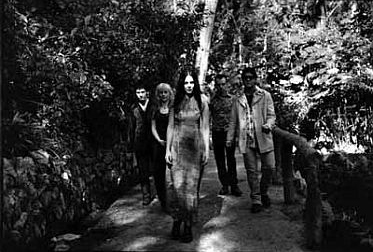 So what does the future hold for Darling Violetta? It’s hard to tell. Many thought that by now the band would have risen above the murk and mire that surrounds the L.A. band scene and drowns many groups into obscurity. The band is still fighting tenaciously for the elusive “major deal” which will put them on the map and on every rock/ pop station in the country. They’ve got the talent. They’ve got the heart. Time will tell if they get the deal.

By CT Thompson
Member Since: Jan 06, 2016
FOLLOW
Founder and editor-in-chief of Way Universe.
COMMENTS
Log in to post a comment. (Easy one-click login with Google or Facebook)
TEACHINGS OF THE MAJOR RELIGIONS
WAS GOTHCON 2002 A SNOW JOB?
WHO OWNS THE MOON?
10 SEX SYMBOLS WHO FELL FROM GRACE