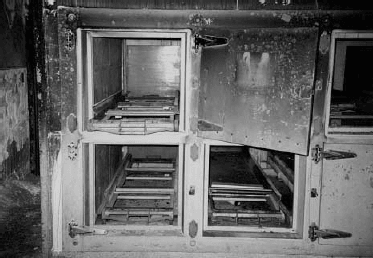 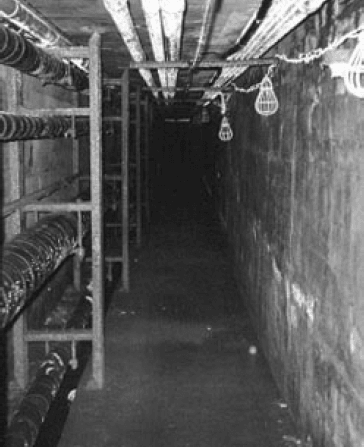 Underground tunnels used to travel between
buildings at Metropolitan State Hospital, also
used in the filming of ‚ÄúGirl Interrupted‚Äù.

We have all seen them, vast lands scattered with abandoned buildings. Their funding has been cut and their doors closed. Depending upon how long they have remained in a state of disrepair determines the condition of the building. Many of these facilities, to the naked eye, now seem to resemble the creepy old rundown buildings of Hollywood film sets. But to those of us with an eye for the paranormal, the mishaps that have occurred between those walls breed the settings for a ghostly adventure. For that reason, abandoned eerie places like Waltham Metropolitan State Mental Hospital in Waltham, Massachusetts have attracted cultists, paranormal investigators, and curious teenagers alike. I once lived only a few miles from one of these facilities and tried hard to resist the temptation to cross the no trespassing signs that fence off the property.

Waltham Metropolitan State Mental Hospital or Met State as locals refer to it has become known as one of the most haunted places in Massachusetts. This year marks 11 years since Met State has closed. During its operation and in the years since, people have reported hearing voices, seeing apparitions, and finding blood spattered on the walls. The approximate 400 acre grounds are home to some 40 buildings that house different wards, many of which are connected with underground tunnels. The tunnels themselves were even used in movies such as Girl Interrupted. The buildings range in age, the oldest dating back to 1927, just 6 years before the hospital itself was opened. There are two separate hospitals on the grounds: the main hospital and the Gaebler Children's Hospital.

The terrible patient conditions can only contribute to the feeling of fear associated with this place. In 1990 the horrible treatment of patients was finally made known to the public. Here is an except from an article in a March 1991 edition of the Boston Globe:


Michael Bogosian, a 32-year-old supervisory investigator for the department, recalled a case in which one patient was discovered to have mysterious burn marks around his mouth.

"The first clue came from a nursing supervisor," Bogosian explained. "When she raised her hand to smooth her hair, the patient shrank back into a corner in a show of dread." Other patients in the unit exhibited similar reactions.

Investigators learned that two patients in the unit suffered from an illness that compelled them to eat cigarettes. From interviews with reluctant staff members, Bogosian learned that several staff workers would throw lighted cigarettes on the floor and watch the patients leap to swallow them. 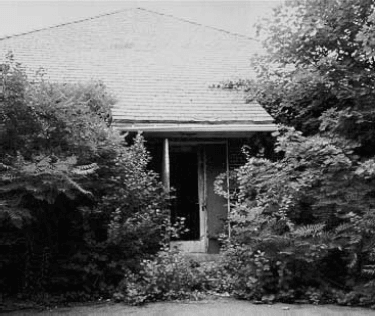 Outside of the Pathology building at
Metropolitan State Hospital

The investigation revealed that some half-dozen staff members were also involved in punching and kicking the patients, while another half-dozen knew about the abuse but failed to report it.

In another case, a mental health worker forced a blind patient to strip and painted a swastika on his buttocks.

In the most recent highly publicized case of patient abuse, investigators spent about seven months and interviewed more than 100 people to find out who was involved in a pattern of sexual abuse of female patients at Metropolitan State Hospital. In November, department officials announced the firing of four hospital workers in connection with the sexual abuse of five female patients. The department also disciplined 31 other staff members for failing to report their knowledge or suspicions about sexual abuse at the facility.

There have also been a multitude of suicides and even a murder on the property. In 1978 Ann Marie Davee, a patient of the facility, was murdered by a co-patient Melvin Wilson. Soon after her disappearance, hospital staff found another patient in possession of seven of Miss Davee's teeth, giving the hospital the nickname of "The Hospital of Seven Teeth". Miss Davee's fate remained a mystery until her dismembered body was found two years later, buried in "three or four holes", said Kenneth Wayne, an attorney general's spokesman.

The cadaver holding cells inside the morgue at
Metropolitan State Hospital

Currently, the hospital encounters hundreds of attempted trespassers a month and is patrolled by security officials. Security officer Brandon Leach states, "I have been offered money, drugs, alcohol and sexual favors just to allow people access to the hospital grounds." These attempts are worth it just to experience the strange happenings that plague the Met State. Brandon tells of his experiences with the hospital both as a security guard and as a child. "I don't enter the buildings often but when I have, I have heard footsteps on the stairs in the Children's building when no one was there but me. The radios often send out large squawks and when the other guard is asked if they had said anything they respond wondering what you are talking about. I continually have the feeling of being watched. There is a general uneasiness surrounding the whole grounds." Brandon also has seen a group of cultists on the property. "There are about 25 of them. We would see them and they would be heading toward the morgue. We can't do anything ourselves, so we called the local police. We found where the group was last seen and could hear their voices. The police reluctantly entered the morgue with us. We continued hearing the voices abut could not find the group. The morgue is the one section of the property that is not connected to the tunnels so we knew that they weren't in them. We searched the building twice over and still could not find the source of the voices. The police quickly left. They don't like to come to the hospital grounds. Even they are freaked out by it." Most recently Brandon and the other security officers have found an alter, the surroundings of which seem to be stained in blood. When an officer upturned the alter and its surroundings, the owners of the alter returned to fix the area up. They also seem to have an axe that they used to hack into the doors and walls surrounding their "sacred" area.

All in all the Metropolitan State Mental Hospital, with its furtive history and exciting happenings, certainly isn't a happy place. I for one wouldn't want to work there night after night and I commend those that put up with the harassment from visitors alive and dead.