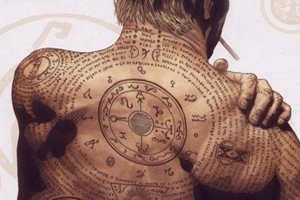 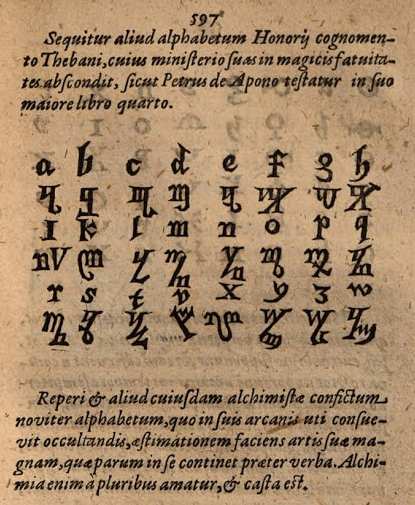 Page 597 of Libri Polygraphiae VI by Johannes Trithemius
Theban Script is an alphabet with no associated language. The origins of its creation are unknown. It is theorized that it was created as a cipher for Latin sometime prior to the 11th century. This makes sense, as each symbol corresponds with a Latin letter.

During the middle ages occultism and witchcraft were highly taboo. Magicians of the time would have wanted to hide their writings, and it is thought that Theban Script served this end.

Theban Script is also sometimes referred to as the Runes of Honorius, the Witch's Alphabet, Witch Writing, and Witch's Runes. Some modern-day witch covens proclaim that Theban Script is intertwined with witchcraft throughout the ages.

The alphabet was first published by Johannes Trithemius in Libri Polygraphiae VI (1518), in which it was attributed to Honorius of Thebes. Trithemius' student Agrippa (1486-1535) attributed it to Pietro d'Abano (1250-1316). The alphabet was then published again in Antwerp in 1531 by Heinrich Cornelius Agrippa under the title, The Three Books of Occult Philosophy. Agrippa also attributed the alphabet's origins to Honorius. Whether Honorius or Pietro d'Abano first penned the script is unknown.

The true identity of Honorius of Thebes remains a mystery. He is possibly a mythical character from the Middle Ages, although his first printed work did not appear until 1629. Mystery persists about the identity of Honorius. Both Pope Honorius I and Pope Honorius III have been linked to him. According to the Sworn Book of Honorius, he is supposed to be, "The son of Euclid, master of the Thebians". But the book offers no source or further clues as to whom he might really be.

Today, Pagans of all kind use Theban Script to encode text in their personal Book of Shadows. Witches also use this alphabet to create amulets or talismans by carving symbols on various items such as stones or wood.

There is one final symbol that denotes the end of a sentence:

By Michael Ramses
Member Since: Jul 20, 2017
FOLLOW
I love to write about the strange, unusual, and paranormal.
COMMENTS
Log in to post a comment. (Easy one-click login with Google or Facebook)
HERBAL MEDICINE
WHEN WILL WE GET A BITCOIN ETF?
SHRIMP PASTA SALAD
HAUNTED HISTORY: THE HOTEL SAN CARLOS