Ghost in a Jar 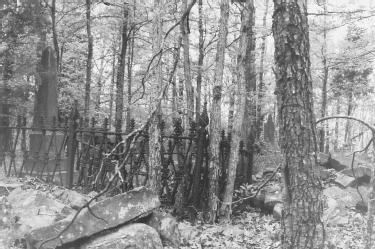 2,565 Shares
Pushing through the brush, you spot a rundown foundation and what appears to be a cemetery. Your trusty metal detector held firmly in your hand, you push onward. Off the path you are sure a treasure will be buried around what was once a dwelling in the woods. You scan the ground. Beep...... Beep..... Beep... Beep... Beep. Beep. You have found something. You pull out your trowel and begin to dig. While working your mind drifts off and you imagine finding chests filled with gold and jewels. You begin to dig faster in anticipation of your prize. Thud! You hear the sound of your trowel striking wood. You quickly clear away the dirt and pull a wooden box from the hole. Your eyes wide open, a grin growing across your face, you creek the rotted box open. Inside you find two jars and an old journal. While pulling one of the jars from the box it slips from your grasp and smashes. On the ground lay the shattered pieces and a candle that was apparently inside. Then you notice a black smoke slowly dispersing through the air. You quickly snap some pictures, gather your new treasure, and leave the area.

That is what happened to Tommy Johnson some 20 years ago. Since then he has been plagued by what he refers to as The Black Thing. It appears as a black cloud mostly assuming no definite figure, but occasionally it resembles a profile. Tommy recalls the happenings of that night when he returned home. "I had my first visit from what I can only describe as "The Black Thing". While lying in bed, this “thing” fell on me and it felt like I was being pushed down thru the bed and the floor, into a pit if you will! I struggled with it and managed to somehow escape its clutches," tells Tommy.

Since that night Tommy has been attacked and haunted by the mysterious black figure. Even Tommy's family has come into contact with The Black Thing. One of his grandchildren claims to have spoken to it. The Black Thing asked to be referred to as Marcello. Desperate, Tommy contacted anyone he could think of to learn all he could about his supernatural finding. "I finally talked to someone who is versed in these things and was told that the only way to rid myself of this thing was to pass the unopened jar on to someone else," tells Tommy. He then placed the jar up for auction on e-bay with a starting bid of $99.00. The link quickly circulated throughout the Internet. Unfortunately for Tommy a majority of the bids made on the precious jar were bogus astronomical bids. It only brought negative attention to him and his home. Ultimately the winning bidder too was a bogus bidder and Tommy still holds the jar.

The Cemetary where Tommy Johnson found the jars
Tommy often attempted to catch Marcello on tape to no avail until earlier this year. When he did he quickly copied the short video on to his computer and began making copies for the masses. One person gave Tommy the idea that if he could capture Marcello on tape, he could then disperse of the entity bit by bit. While reviewing a short recording he made Tommy paused the tape. While paused the image of The Black Thing slowly turned and faced him.

Tommy currently sells floppy discs containing the short video clip on his website. The initial copies seemed to have plagued their new owners. "Since getting it, my computer has been going haywire and usually at the most inappropriate times! I've also been having nightmares, something which I seldom ever do," states one purchaser. 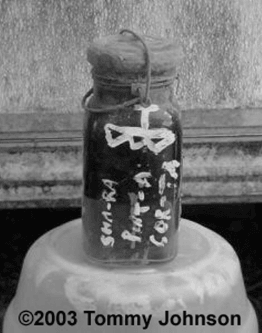 The remaining unopened jar
Tommy Johnson found
"We have been noticing small black flies in the computer room (never anywhere else in the house) that only come out at night. At first it was only one or two, until finally, the night I was in here alone listening to the Sci-Fi radio broadcast, one, then two, then half a dozen started flying around and landing on my computer screen. I swiveled around in my chair to see where they were coming from, and the entire wall behind my computer was covered with them," claims another customer.

After receiving a number of such correspondences, Tommy searched through the old journal and found a containment spell. Tommy now claims that The Black Thing is completely contained within the disc.

I myself experienced problems in contacting Tommy. When I attempted to call him, his phone did not ring at all in his home. He attempted to email me multiple times, yet I received only a portion of the emails. Tommy has not let Marcello rule his life. He has not even let the ridicule he has received rule his life. This, I am sure, is a daunting task to say the least. I am not sure what Tommy brought into his life two decades ago, but it certainly was not a helpful spirit. I cannot imagine living my life with a spirit making itself fully known and running rampant throughout my house.

By Atreyana Star
Member Since: Jul 25, 2017
FOLLOW
COMMENTS
Log in to post a comment. (Easy one-click login with Google or Facebook)
SCIENTISTS CAN'T EXPLAIN THIS STRANGE PLANET
WHO HAS TIME?
CAPTAIN PICARD RETURNS IN A NEW SERIES
ONCE IN A BLUE MOON