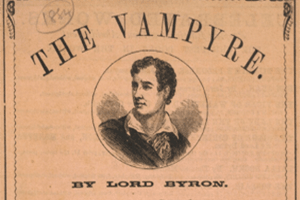 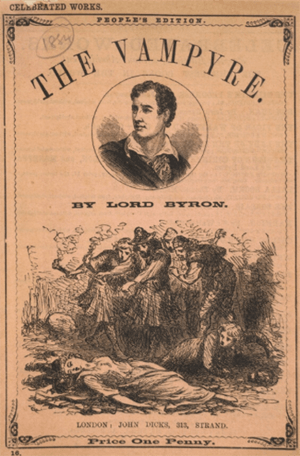 Who would ever have thought that the two most enduring monsters of our time would both be created on the same rainy holiday in Switzerland, but in 1816 when the poets Byron and Shelley both rented villas on the shore of Lake Geneva that’s exactly what happened. Shelley, with his wife Mary and stepsister Claire, rented a chalet at Montalegre, while Lord Byron and his personal physician Dr Polidori, rented Villa Diodati.

Because of the heavy rain on the trip, the group spent many tedious hours indoors. They would amuse themselves reading to each other aloud and drinking large quantities of laudanum, which was a heady combination of brandy and opium.

They read from a book entitled, Fantasmagoriana by Jean Baptiste Benoit Eyries. The book was a collection of ghost stories which had been translated from German into French. The book included a story called "Les Portraits de Famille," in which each member of a family had to compose a supernatural tale. This gave Byron, Shelley and their guests an idea, and they decided they would do the same.

The two great poets failed to produce anything of any note. Shelley tried, but failed to write a short story about a strange event that happened early on in his life. Byron managed to compose half a story, about two men who decided to travel to Greece. Whilst there, one of the men died of an unknown disease. The other man returned to England to find his friend alive and seducing his sister. Mary Shelley’s story would eventually become the very first novel about the crazed scientist, Frankenstein. While Polidori’s tale was about a Swiss patriot’s incestuous relationship with his sister.

Polidori, however, was far more interested in Byron’s story of the undead lover, and he began work on his version of the story. The main character in the story was, Lord Ruthven, and Polidori modelled this character very heavily on Byron himself.

Polidori never published his work. In fact he put it away and completely forgot about it. However, three years later it somehow found its way into an edition of English publication, New Monthly Magazine, in April 1819, claiming Lord Byron as the author. Whether or not this was deliberate to cash in on Byron’s notoriety is not known, but it did guarantee the story was widely read. 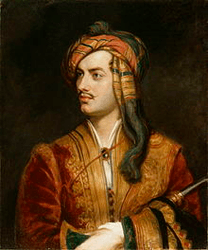 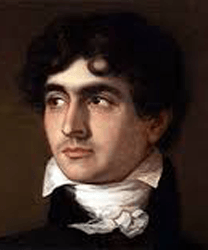 Dr. Polidori
The story was an instant and immense success, and demand was so great that a cheap edition was published as soon as the magazine had sold out. Within months the story was translated into French, making Byron’s name as an author there, and his French publishers quickly incorporated the story into a collection of his work Byron insisted that they remove the story from the second edition, but the work was in such demand that he soon gave in. The third edition of the collection ran with The Vampyre reinstated.

Byron thought that Polidori had cheapened his original story, and was furious. Polidori was also furious, for he had not been asked about the publication or offered any money either. Belatedly, Polidori was paid thirty pounds.

Byron appended most of his version of the tale to his next poem, Mazeppa. He deliberately edited out the last section, in which Darvell returns from the dead, to underline the point that he had not written The Vampyre.

Polidori, author of the world’s first ever vampire novel died two years later in August 1821, at the age of 25. There was a suggestion of suicide, but the official coroner recorded a verdict of "Death by the visitation of God."

By Mark Sesin
Member Since: Aug 11, 2017
FOLLOW
COMMENTS
Log in to post a comment. (Easy one-click login with Google or Facebook)
WILL MICROSOFT START CHARGING A MONTHLY FEE FOR WINDOWS 10?
BANANA BREAD
ELON MUSK IS AT WAR WITH SHORT SELLERS
THE WHEEL OF THE YEAR