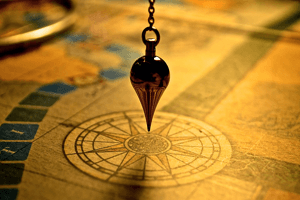 2,542 Shares
The pendulum is a tool used for divination.

Several theories exist as to how the pendulum works. Some say it is a way of direct communication with one's sub-conscious mind. Others proclaim it is a way to communicate with spirits from other realms. Other theories suggest that a pendulum reacts to certain energy fields in various environments.


The pendulum has been used throughout history by the Hebrews, Egyptians, Chinese, Romans, Greeks, Druids, Hindus, Peruvians, and the American Indians. Time Line

The pendulum is one of the oldest occult tools. Its use can be traced to 8000 BC.

Pendulums vary greatly in shape and size. A simple pendulum is a chain 10 to 12 inches with a weight at the base. A washer tied to a string would suffice. The weight may be made out of anything - crystal, wood, or metal. When held in the Querent's hand, the pendulum should hang 1 to 1 1/2 inches above the "Chart."

The pendulum is held lightly by the first and second fingers, and the thumb. The elbow is brought to rest on a surface such as a table, and the wrist bent.

The Querent either asks a loud or thinks a question. The pendulum will then either move in a circular motion, or in a straight line, back and forth. A chart is used to determine the response.


There are hundreds of different charts for use with the pendulum. The Querent usually makes his or her own variations. 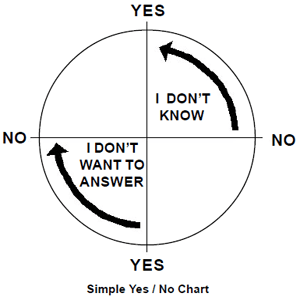 By Michael Ramses
Member Since: Jul 20, 2017
FOLLOW
I love to write about the strange, unusual, and paranormal.
COMMENTS
Log in to post a comment. (Easy one-click login with Google or Facebook)
WHY IS MEDITATION IMPORTANT?
MELANIA TRUMP IS MORE FRUGAL THAN MICHELLE OBAMA
ELON MUSK IS AT WAR WITH SHORT SELLERS
OBSIDIAN