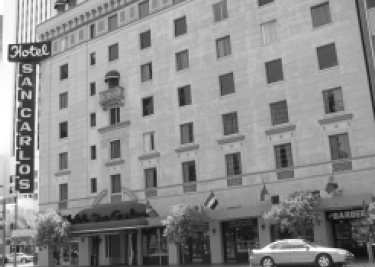 2,250 Shares
From the penthouse that stands on the roof of the seven-story tall Hotel San Carlos in Phoenix, one can get a unique perspective on Copper Square. Downtown Phoenix has changed radically since the hotel was built in 1928. When the hotel opened, it was a luxurious oasis in the desert, featuring air-cooled rooms, a predecessor of modern air-conditioning. At that time it was also the tallest building, which featured the first elevator in Phoenix. These days about all you can see from the penthouse is the other high-rise buildings towering overhead. Seventy-five years ago however, from this rooftop, you could see the young city of Phoenix rising from the ashes of this old Hohokam settlement.

The Hotel San Carlos in Phoenix, Arizona
It was from that very roof that 22-year old Leone Jensen decided to end her life. She was dressed in a white evening gown as she had expected to enjoy a night on the town with her boyfriend. After her dreams for a wonderful night of dancing were shattered, she decided she could not live with a broken heart. She made her way to the roof of the brand new hotel, looked over the edge to the streets below, and jumped to her death, thus giving Phoenix its first suicide.

Ever since that night of May 7, 1928, guests of the Hotel San Carlos have reported many sightings of her ghost. Typically, she is seen as the "white cloud of a woman's figure, accompanied by unexplainable breezes". While some guests may find the idea of the hotel being haunted either exciting or frightening, it has become an accepted responsibility for working at the hotel. For example, the housekeeping staff are so superstitious that they refuse to work on a floor alone; it has become standard procedure now that they work in teams of two or three, no matter what floor they work on.

Leone is probably the most famous permanent resident of the San Carlos, but she is by no means the only ghost. Guests have also reported hearing the sounds of at least three or four children running up and down the hallways, laughing and playing. The story of these children can be traced to a history before the hotel was built, but I shall take a moment and go even further into our prehistory.

Jumping backwards in time roughly 400 years, the Native American tribe known to us today as the Hohokam, made the Rio Salado valley their home. In the heart of this valley, an underground counter-current water spring provided refreshment to the tribe. The natives worshiped their god of Knowledge and Learning at this spot. They believed that from this spring came mahchig, or great knowledge. Whatever great wisdom they gleaned there however was lost when the tribe was forced to move on. It was the modern Pima tribes who named them huhugam, or "those who have gone."

Fast forward again to the early settlement of Phoenix, this very same spring was re-discovered and tapped with a well. Phoenix's very first schoolhouse was built on this site in 1874, with this well water providing refreshment to a new generation of students. It was a one-room adobe building with a dirt floor, but it served the humble forefathers of our town well. Five years later, in 1879, that building was replaced with a two-story brick building - only the fourth brick building in Phoenix. At that time, it was the northernmost building along Center Street, now known as Central Avenue. In 1893, the brick schoolhouse was expanded to sixteen rooms.

It was at some time during the late 1890's that we have different accounts of three or four boys drowning in the well. The school building was eventually declared unsafe, condemned, and the property put up for sale in 1916. Could these be the boys who can still be heard playing in the hallways of the Hotel San Carlos?

This very special well is still in use today; it resides in the basement of the Hotel San Carlos. It serves as the sole source of water to the guests of the hotel. The San Carlos is the only building in Phoenix that is not part of the city's water supply. Even today, hotel guests remark to the staff about the high quality of the cool, refreshing water that comes from the original, antique brass fixtures in their rooms.

The penthouse that resides on the roof has a very interesting story of its own to tell. Charles Harris owned half of the hotel, and also managed it with his wife Elsie and their two sons. Mr. Harris had the penthouse built on the roof for his family to live in. When Charles Harris died in 1946 of natural causes, the hotel went into his family trust. The Harris family moved out and let the trust take over management of the hotel. The original intention was to rent the penthouse out to VIP guests, including some of the many Hollywood actors who frequented the hotel. However, to this day, the penthouse has never and will never be rented out. Yet, work is always being done to maintain it. Electricity is still supplied to it, and it is kept air-conditioned. An expensive proposition to say the least, especially if there are no living guests staying in the penthouse. 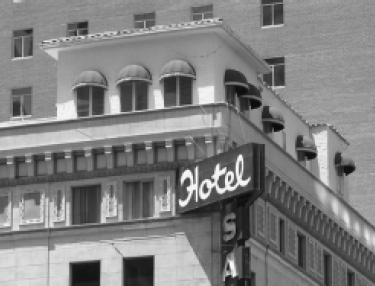 The penthouse atop the Hotel San Carlos
All told, the Hotel San Carlos is a wonderful break from the bustle of Downtown Phoenix. It is still a well-appointed hotel, with fine amenities, including a sun deck and swimming pool on the third floor. It has recently been added to the charter of hotels listed by the Historic Hotels of America. Its Italian Renaissance-influenced architecture, and original antique fixtures, put it in a class by itself.

For Hollywood history buffs, you will enjoy seeing the "San Carlos Hollywood Star Walk", which was inlaid on both the Central and Monroe sidewalks in front of the hotel in March 1993. Each sidewalk star names a famous movie star or big band leader who stayed at the hotel while they played in one of the nearby theatres, like the recently restored Orpheum Theatre. There are also suites in the hotel that are named after the stars that stayed in them.

The hotel sits in the heart of Downtown Phoenix, which puts it in great proximity to major local events at Bank One Ballpark, America West Arena, and conventions at the Civic Center. The fact that it is haunted is just icing on the cake for completing a truly unique experience.

Dan Shaurette is a native Phoenician and local writer of poetry and prose, who spends a great deal of time pretending not to be a goth, but all this proves is that he's really good at the masquerade.

By Dan Shaurette
Member Since: Jul 25, 2017
FOLLOW
Author of Lilith's Love, Black Magic, and Once Upon a Scream.
COMMENTS
Log in to post a comment. (Easy one-click login with Google or Facebook)
QUENTIN TARANTINO IS IN NO HURRY TO MAKE HIS FINAL MOVIE
PRESIDENT TRUMP CALLS OUT MEDIA ON BIASED CLINTON URANIUM ONE COVERAGE
CADUCEUS
PALMISTRY