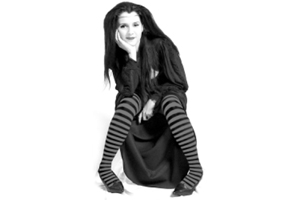 2,566 Shares
Christy Moeller-Masel is the author and illustrator better known as Madame 'M'. She has self-published two children's books of dark stories about her quirky creature friends, which have delighted kids and adults of all ages. Her first two books, "Creepy Little Bedtime Stories" and its sequel "Eerie Little Bedtime Stories", have earned rave reviews and awards, including the ABPA 2001 "Best Children's Fiction Award".

These hardcover books are hauntingly beautiful and feature deliciously ghoulish illustrations and tales of such characters as "Witchy Boo-Boo", "Target Man", and "Edgar, The Invisible Kid". She will soon be releasing "Trauma Queens/ Trauma Kings" featuring more tragic treats for her fans. 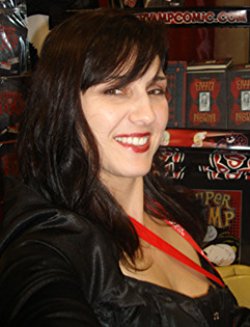 Q. First off, Christy, thank you for this opportunity to interview you. I remember the first time I saw your first book; I was immediately awestruck by the cover artwork. Flipping through it and finding all of the wonderful drawings inside, I was immediately bewitched. When did you first come up with the idea for your Creepy Little Bedtime Stories?

A. When I was working as the Assistant Art Director for a magazine in 1996. I wanted to write and illustrate a gothic children's book. I was a little goth girl in the 80's and noticed that a lot of the teens that I had been gothy, punk with, now had families and were struggling with Barney issues. I thought it would be fun to give them a book that teaches the same sort of morals, but with a more gothic twist.

Q. If I may ask, how and when did you and your husband, "Wolfman Joe" meet?

A. I met my hairy little wolfman in Denver, Colorado on my birthday, 1990. I was at Oktoberfest with a friend of mine and we bumped into him and his friends. My friend had gone to high school with Joe and so she introduced us. Before that, however, his father was one of my college professors, so I knew a bit about him in advance. The girls in my class would talk about how cute our professor's son was.

Q. I'm sure he's been very supportive of your ventures, but what has he thought about being immortalized in your collection of stories?

A. He is very supportive and bears with me very well. He didn't seem to mind the new nickname since it really suited him well and the story I wrote is very much like him. It goes that he turns into a wolfman when he doesn't get his coffee, which is a pretty accurate portrayal.

Q. Besides Joe, how many people that you know have been the spark for a character you wrote about? How much of it came from your own life lessons that you wanted to share with your readers?

A. I would say that all of my characters are based on my real friends, family or situations that I have found myself in. I have a mini tape recorder so sometimes I will see something inspirational on the street and just start dictating it.

Q. Do you consider yourself to be a poet who can draw, an illustrator who can write, or equally suited to both art forms? Do you find one to be more challenging than the other?

A. I guess an illustrator that can write. The illustrating comes more naturally to me and many times the character is drawn first and then a story is built up around that. Like the "Two-Faced Girl." I drew her first and then thought about what life would be like for her. Also, after the drawing was done, I noticed that it could easily become a double image, with the girl's two faces becoming the face of William Shakespeare, so I worked that into the poem as well. The whole poem would be completely different if I had worked in reverse.

Q. How long have you been writing and drawing? Had you done anything else like this before your first book?

A. I had worked as a graphic artist and as the Assistant Art Director at a magazine for many years, so I had some background in the publishing industry. I have also helped others publish their books before actually doing my own, so that was a big help. As a child, I used to write and illustrate my own books for enjoyments. But as far as writing and illustrating an entire book for publication, this was my first time.

Q. As a father of four, I myself enjoy your stories, and love it when my kids ask me to read to them more of the stories, and read on their own. Would you consider yourself a Children's author, or would you ever write other genres? If so, have you written anything else, or at least been tempted to?

A. I do not think that my books are only for children, although they certainly are written on their level. Lately there has been a boom of children's books for adults and I like to think that my book can fall into that category just as easily. The book I am working on now, "Trauma Queens/ Trauma Kings" is more of a children's book for adults than it is a "children's book", since many of the characters meet their demise. It will actually be sold more as a gift book.

Q. Did you leave another occupation to devote your life to Creepy Little Productions? Has this become a full-time job for you?

A. I was doing freelance work at the time that I was working on the first book. I have cut back quite a bit, but still will accept certain jobs if they appeal to me, usually book covers or something related to books.

Q. Did you try publishing your books through traditional houses before deciding to self-publish? Did you have an agent?

A. Not really. Before this book, I had designed an "Alice in Wonderland" popup book. It really would have been a nightmare to print because of all the small pieces that would have to be hand assembled, but I had faith in it. I sent samples to multiple publishers and got just as many rejection letters back. That is when I decided that it was not worth it to go through all that time and energy, just to leave issues that were important to me in other people's hands.

Q. Besides Phoenix, Arizona, where else have you lived? Have you found Arizona to be easier to publish and promote your books in?

A. I was born a military brat, so my list is pretty long. I have lived in Arizona (3 times), Texas, Arkansas, Ohio, Louisiana (3 times), Colorado, Alabama, Korea and Germany. Arizona has been very good to me. I think the people here are very genuine and supportive, not a lot of egos. They have given me a good amount of press. Southern California has also been a very good state for my books, so it must be a Southwestern thang.

Q. Do you travel often to promote your book? Where was the most exciting place you've been on tour?

A. Most of my tours outside of Arizona are in California, but my most exciting would probably be in Chicago. I may by doing one in Alaska soon, which should be interesting for a desert rat like myself.

Q. How do you define "success" and would you consider yourself and your books to be successful?

A. I don't think that success means that you have a lot of money per say, but rather that you are doing something that makes you happy and fulfilled. In that aspect, then I am truly successful. I'm positive I could be more financially stable working a corporate job, but being in an office all day zaps all the life out of me. Writing and illustrating are more in tune with being outdoors, staying up late and just being creative and those are things that are more important to me than having a lot of cash to blow.

Q. Is there anything you haven't written or otherwise done that you want to and look forward to doing?

A. More books and possibly an animation.

Q. Is there anything in particular, an author or favorite book, that has influenced and inspired you?

A. I enjoy reading stories that take the side of the character that is most misunderstood. One of my favorite books is exactly that. It's called "Wicked: The Life and Time of the Wicked Witch of the West" by Gregory MacGuire. After reading that book, I felt so bad for the Wicked Witch that it changed my perception of "The Wizard of Oz" forever. Of course, I have always loved Roald Dahl and Edward Gorey books, too, for their sort of gloomy way of looking at childhood.

Q. What would you say has been the hardest part of writing? What about getting published?

A. For writing, the hardest part is the fine tuning. A story may flow out in a few minutes, but the fine tuning can take weeks. For publishing, to me the production part is fun, but the marketing is tedious.

Q. What advice would you give for aspiring authors?

A. Write down every idea! An idea is only a thought until it is documented. Once you start writing things down, the ideas flow faster. I don't know about you, but my memory is not the greatest, either, so writing things down keeps all those ideas that would otherwise ooze out of my brain as I sleep. Also, believe in your own work. Maybe even self publish your first book, if nothing more than as a portfolio piece to show what you are capable of. It shows that you believe enough in yourself to invest in you and that sort of confidence shows.

By Dan Shaurette
Member Since: Jul 25, 2017
FOLLOW
Author of Lilith's Love, Black Magic, and Once Upon a Scream.
COMMENTS
Log in to post a comment. (Easy one-click login with Google or Facebook)
THE ANKH
WILL MICROSOFT START CHARGING A MONTHLY FEE FOR WINDOWS 10?
HERBAL MEDICINE
HUNTER'S MOON