What Really Happened in Charlottesville Virginia 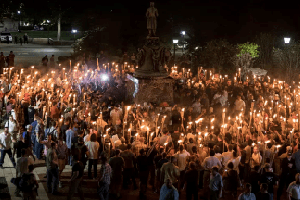 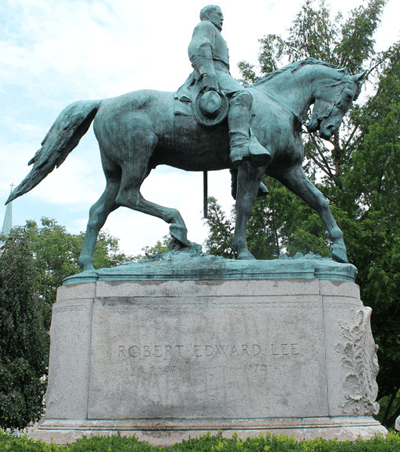 Statue of Robert E. Lee and at the center of the controversy.
The words “Black Lives Matter” can still be faintly read at the
base of the statue. The statue was vandalized in June of 2015.
On August 12th in Charlottesville, Virginia, protesters and counter-protesters clashed. On one side was a group of white nationalists that was protesting the removal of a statue of Robert E. Lee. The statue has been at the center of an ongoing controversy. In June of 2015, vandals painted Black Lives Matter across the base of the statue. Since then there has been an ongoing liberal effort to remove the statue.

In 2016, Charlottesville's Vice Mayor Wes Bellamy began a movement to have the statue removed, along with other Confederate monuments. In March of 2016, he held a news conference announcing the City Council would appoint a commission to review and discuss the issue.

The special commission was formed in May of 2016. Later that year it recommended that the statue should either be moved or modified with the inclusion of new accurate historical information. But in February of 2017 the City Council voted to remove the statue instead. Opponents of the plan immediately sued, arguing the city did not have the authority to remove the statue under state law. The court case is ongoing.

In June of 2017, the City Council renamed Lee Park, where the statue is located, to Emancipation Park. 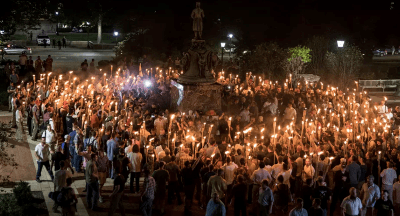 Friday, August 11th, 2017
A protest march was announced in July of 2017 by a white nationalist group, to protest the planned removal of the statue and the renaming of Lee Park. The march attracted 200-300 protesters. An accurate count of counter-protesters is difficult as they were spread around the city, but it likely they were fewer in number.

The protest began on Friday, August 11th. It was obvious to all that violence was about to erupt. Both sides had pepper spray, lighter fluid, shields, and clubs. The protest continued into Saturday, August 12th. Despite outbreaks of violence between the two groups the police stood by and did nothing. 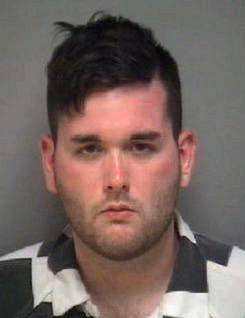 Mug shot of James Alex Fields
Around 11:30am on Saturday Virginia Governor Terry McAuliffe declare a state of emergency. Police started telling the crowds to disperse and the violence began to ebb. Then at around 1:45pm James Alex Fields, a suspected white nationalist, allegedly drove his Dodge Challenger at a high rate of speed into a sedan, which then hit a minivan in front of it. At least 1 counter-protester was killed and 19 were injured. James Fields has been charged with second degree murder.

Later in the day President Trump interrupted a signing ceremony at the Veteran's Administration and made the following statement:

"We condemn in the strongest possible terms this egregious display of hatred, bigotry and violence on many sides, on many sides"
Critics of the president and many members of the mainstream media immediately jumped into action and lambasted the president. Why didn't he denounce the alt-right and white nationalist organizations? On CNN political commentator Ana Navarro demanded President Trump denounce white supremacist hate groups and call them out by name.

"Racism is evil and those who cause violence in its name are criminals and thugs. Including the KKK, neo-nazis, white supremacists, and other hate groups..."

It's hard to know if Ana Navarro directly impacted this second statement by the president, but it is likely. She is a republican strategist, woman of color, and a conservative. She is well-respected in conservative circles.

Protests rooted in hate are nothing new. This has happened before, in our very recent past. Let's take a look at how our former president handled a similar situation.

In 2014 and 2015 during protest marches by Black Lives Matter, protesters directly called for violence against police.


"Pigs in a blanket fry em like bacon!"
Black Lives Matter march on August 29, 2015 in Minnesota

How did then President Obama react to these stunning and overt calls to violence?

On October 22nd, 2015 after both of the above events, President Obama defended Black Lives Matter.


In February of 2016 President Obama met with Black Lives Matter leaders at the White House. Both Bernie Sanders and Hillary Clinton also met with leaders from the movement.

On July 13th, 2016 President Obama met again with activists from the Black Lives Matter movement at a forum on policing. CNN covered the story in a very positive light.

What do you think would happen if President Trump spoke about white nationalist groups in the same way President Obama speaks of Black Lives Matter? Of course he would never do that, but this is just further evidence of the rampant bias that runs throughout the mainstream media.

If you're a liberal, you get a pass. If you're a conservative, you will be thrashed, vilified, and excoriated.

Get the politics out of the media. You are failing 1/2 of this country. You are failing in your constitutional duty. Stop favoring liberals and persecuting conservatives. If the mainstream media continues down this path it will cause irreparable harm to our country.
+1

By Damien Jones
Member Since: Aug 02, 2017
FOLLOW
Politics, government, and the way the world works are what I love to write about.
COMMENTS
Log in to post a comment. (Easy one-click login with Google or Facebook)
THE MOONS OF JUPITER
THE GOD SOUND
EASY PIZZA
NEW DEEP SPACE IMAGES FROM HUBBLE SHOWS 15,000 GALAXIES