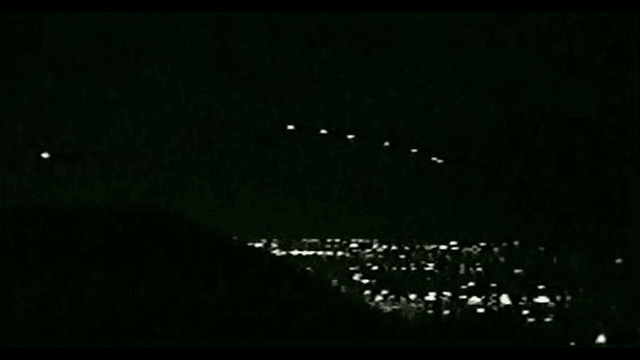 2,526 Shares
On this particular Thursday, something was moving quietly through the ionosphere many miles above the surface of the planet; several somethings in fact, several dozen huge yellow chunky slablike somethings, huge as office buildings, silent as birds.


The Hitchhiker's Guide to the Galaxy, Douglas Adams

In March of 1997, the Hale-Bopp comet made its closest pass by Earth and was visible to the naked eye for most of the month. It was an expected and brilliant astronomical phenomenon, one that won't be seen again for another 3,000 years. Many amateur astronomers, and regular folks with telescopes, were eagerly scanning the skies hoping to catch a glimpse after the sun set.

But on one particular Thursday, March 13, 1997 to be exact, something else was spotted in the night sky above Phoenix, Arizona. Not by one or two folks, but by hundreds of witnesses, some with video cameras. Just around 10 PM, about nine bright orbs of light appeared in a "V"-shaped formation above the mountains south of Phoenix, hovered for a while, and then disappeared southward. This was only one of an amazing collection of sightings that progressed throughout the evening, from Las Vegas, Nevada to Tucson, Arizona.

Local TV stations, authorities and air force bases were deluged with calls from all over the valley as people called panicked by what they had seen. When the TV stations aired the amateur video of the orbs, more calls came in -- not just because of that incredible sighting, but because of sightings made earlier in the evening, all over Arizona. Once seen on the air, the phenomenon was given a name, The Phoenix Lights. It would become one of the largest recorded sightings in American UFO history, garnering even international coverage and investigation.

At approximately 7:55 PM Arizona time, a gentleman from Henderson, NV, called in the first sighting, reporting that he observed what he described as a "Vshaped" formation of six bright blue and yellowish-white orbs leaving the area around Las Vegas, NV, making its way over the border into Arizona. As the object passed overhead he said it was very quiet, making a sound like that of a "rushing wind".

A former police officer from Paulden, AZ reported the second sighting. He left his home at about 8:15 PM, and as he was driving, he spotted a cluster of four reddishorange lights with a fifth light trailing the other four. There were other sightings around the Prescott area at about 8:15 PM.

Between 8:30 and 8:45 PM were the Phoenix sightings. Probably the most interesting involves a truck driver who was hauling cement from Glendale who noticed a bright object in the sky. When he pulled his truck over to take a better look, he saw two aircraft fly from Luke Air Force Base to approach the strange object, which then vanished. There were other accounts of military aircraft tracking the objects all the way to Tucson. Luke A.F.B. denies that they tracked anything that evening, and that in fact the base is purely a training facility and its aircraft would never have been called for such a purpose.

One group of witnesses reported that they saw a huge "wedge-shaped" craft with five lights on its surface. Another group of witnesses saw an object "shaped somewhat like a sergeant's stripes" come over Camelback Mountain near downtown Phoenix. It apparently stopped directly above them, at the intersection of 7th Avenue and Indian School Road, where it hovered for about 5 minutes. It stayed so steady that they reported they could see panels on a definite surface that blocked a large portion of the sky above them.

The object then flew to the area around Sky Harbor Airport, between Phoenix and Tempe, where two air traffic controllers in their tower, and several pilots on the ground and on approach, observed it as well, saying they saw absolutely nothing on their radar. Other sightings were made in the same time period in Scottsdale, Glendale, and Gilbert.

This was either one fast, large object, or there were perhaps a few on parallel paths. Some reports seem to conflict, but the sightings all agree that the object was swift and enormous. Conservative estimates of the size are on the order of at least three football fields wide. Depending on their proximity to the witnesses, some estimates ranged up to 2 miles wide, based on the city block over which it stretched.

Between 8:45 and 9:00 PM, other sightings were reported by witnesses traveling the stretch of Interstate 10 that runs from Phoenix to Tucson. One family that was driving from Tucson north to Phoenix reported that they could easily see each "wing tip" of the object from either side of their vehicle. As they continued to drive in the opposite direction of the object, they claimed that they were underneath it for roughly two minutes, at a clip of about 80 M.P.H. 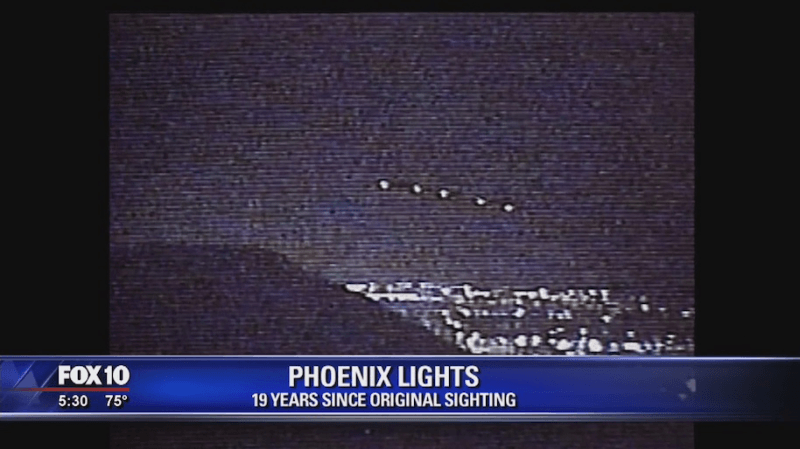 So from even the roughest estimates, the formation traveled from Henderson, Nevada to Tucson, Arizona within an hour's time. As the crow flies, that's 354 miles (or 308 nautical miles) in less than an hour. That's one fast crow!

This is just a sampling of the many reports that were received that night, and all of these happened before the lights that appeared over Phoenix that were captured on videotape at about 10 PM. So, with all of these witnesses' reports, and videotaped recordings, has there ever been any explanations offered for what happened?

Whether you believe in UFOs, alien visitations, and conspiracies or not there were a few attempts to prove that the Phoenix Lights either were or were not extraterrestrial in nature. In June, a reporter from NBC affiliate KPNX-TV filmed a drop of flares by military aircraft, above an Air Force range southwest of Phoenix. These flares were caught on video and looked very much like the same mysterious orbs that appeared at 10 PM on March 13th. They declared that they had solved the mystery.

Not long after that story broke, the Maryland Air National Guard, which was training in Arizona for the winter, announced that they had a squad of A-10 fighters that flew over the gunnery range and had dropped those flares. The Arizona National guard determined that those flares were indeed dropped at 10 PM at an altitude of 15,000 feet. Even with this declaration by the military explaining the 10 PM Phoenix Lights caught on video, they also declared that the A-10s did not proceed north of Phoenix and therefore could not have been the formation that was seen in the Phoenix area around 8:30 PM.

Most people are never satisfied by the military's explanations, finding them too convenient and supporting their conspiracy theories. The nature of the government being able to hide some secrets and release others at will only supports their beliefs. However, one group of witnesses took their video of both the "Phoenix Lights" and the "June Flares" to a video lab for analysis. Jim Diletosso's company, Village Labs of Tempe, did the analysis and concluded that not only were the lights in the different videos not the same type of light, but that the Phoenix Lights were not flares, planes, or anything else man-made.

This declaration became much hyped as well; I mean this would become proof of an extraterrestrial presence over Phoenix! Newspapers and television, and even a Discovery channel special about UFOs touted Diletosso's discovery. However, the kind of optical analysis he claimed to have done is comparable to spectral analysis. He explained that a video recorder could capture all the minute details of a source of light, and that his computers could break down and analyze that source, creating a graph. 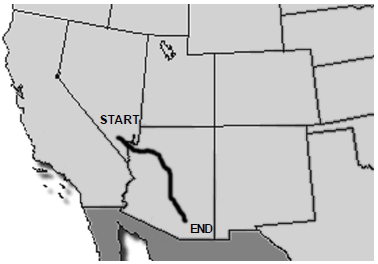 The path of the Phoenix Lights
However, as the Phoenix New Times very accurately described the physics of how a video camera works, this amount of detail just isn't possible. All Diletosso could do is compare the color histogram, or breakdown of red, green and blue components of the pixels, that make up the picture of the light source. In fact, when the New Times reporter asked Diletosso to reproduce his analysis, he was unable to do so and became defensive and touted scientifically impossible theories.

But we all love scientifically impossible theories, don't we? That's why it's called science fiction, that realm of writing genre that applies the technical jargon and speculative theory about everything to create scenarios that are literally out of this world. So many people want to believe in UFOs, and some people want to discount them. So in the end, there really is still no final say over what appeared over Phoenix five years ago. All that is known is that there was something in the sky that night, and it wasn't just the bright comet Hale-Bopp. 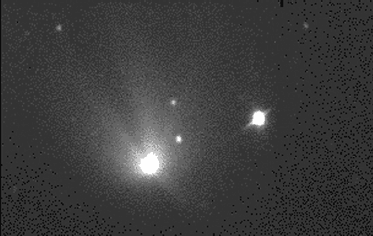 The Hale-Bopp comet and it's curious
"companion" artifact/star
Photo taken by amateur astronomer Chuck Shramek
Interestingly enough, I have more to tell about Hale- Bopp. Call it a coincidence, or call it a revelation. Literally. Revelations 8:10-11 describes a rock which would fall from the heavens, named Wormwood (or "bitterness"), after the seven seals were opened, bringing about the destruction of the Earth. Sure, there were lots of millennium prophecies, and based on interpretation they either haven't come true, or just are a prelude to more. But one group of people believed their charismatic leader so much, that Hale- Bopp was a sign of the end of the world, that they all committed suicide.

You know who I'm talking about, right? The Nike-wearing members of the "Heaven's Gate" cult, including their leader, Marshall Applewhite, committed suicide in a rented mansion in San Diego, California. They not only believed that Hale-Bopp was a harbinger of destruction, like Wormwood, but they latched on to a story of an anomalous photograph of Hale-Bopp that showed a "companion" object with the comet. They believed this companion was a spaceship that was coming to take them home. On March 22, 1997, comet Hale-Bopp was the closest it would get to the Earth on its approach to swing around the sun. On March 23, 1997, there was a lunar eclipse, which made viewing Hale-Bopp especially brilliant.

To some, it was a sign. Do you remember, "The moon shall become as black as sack-cloth"? On March 27, 1997, Marshall Applewhite lead 38 members of his "Heaven's Gate" cult to commit suicide. They may have chosen San Diego to commence their exit from this world, but did you know that Applewhite and his cult were based in Phoenix, Arizona? Shocking coincidence to say the least. Did Applewhite believe that the object that visited Phoenix two weeks before was the "companion" ship? We may never know.

By the way, the Hale-Bopp comet got its unusual name from the two men who simultaneously made the discovery of it. Officially named "C/1995 O1", for when it was discovered, in June 1995. Alan Hale, Ph.D., a professional astronomer from New Mexico called in the first discovery. Moments later, Thomas Bopp, an amateur astronomer made the same discovery while at a star-gazing party with friends 90 miles away from the lights of the city; not all that far from the suburb of Phoenix, Arizona that he calls home.

By Dan Shaurette
Member Since: Jul 25, 2017
FOLLOW
Author of Lilith's Love, Black Magic, and Once Upon a Scream.
COMMENTS
Log in to post a comment. (Easy one-click login with Google or Facebook)
FIX YOUR BROKEN IPHONE SCREEN YOURSELF
HARMLESS HISTORICAL NUTS
MELANIA TRUMP IS MORE FRUGAL THAN MICHELLE OBAMA
ELEPHANTS RARELY DIE FROM CANCER