The Search for Extra-Terrestrial Intelligence 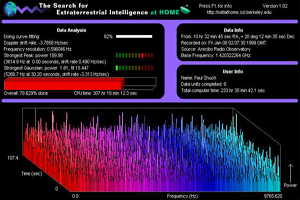 2,711 Shares
“Even light, which travels so fast that it takes most races thousands of years to realize that it travels at all, takes time to journey between the stars. It takes eight minutes from the star Sol to the place where the Earth used to be, and four years more to arrive at Sol’s nearest stellar neighbour, Alpha Proxima. For light to reach the other side of the Galaxy, for it to reach Damogran for instance, takes rather longer: five hundred thousand years. The record for hitch hiking this distance is just under five years, but you don’t get to see much on the way.”
From The Hitch Hikers’ Guide to the Galaxy, by Douglas Adams 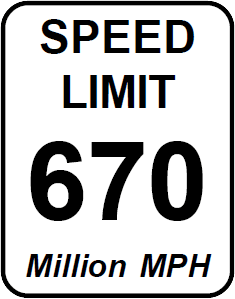 Traveling at a speed roughly about 670 million MPH, light from our sun takes eight minutes to reach the Earth, providing warmth and energy for us to enjoy. Leaving the Earth at the same speed, our radio and television broadcasts leave their transmitters, bounce around in our atmosphere, and reach antennas on Earth designed to receive them instantly. Some of those same signals also make their way off our planet and travel out into the deep vacuum of space.

For only 80 years or so, mankind has been transmitting these unintentional beacons of voice, music, pictures and data, which could potentially find their way to an extraterrestrial civilization. On November 16, 1974, scientists intentionally sent a message designed to introduce ourselves to the ET community at large. This signal was directed to a globular cluster of stars known as M13, which is about 25,000 light years away. Nearly 30 years later, that signal has barely made 0.12% of its interstellar journey.

Bearing all of this in mind, it is possible that an extra-terrestrial civilization could have sent similar radio transmissions out into the cosmos. Whether used by them as a form of communication and entertainment, or as an intentional sign of an advanced technological society, we might someday be able to detect their signal. This is the foundation of various projects dedicated to the Search for Extra-Terrestrial Intelligence, commonly known as SETI.

Listening for radio signals coming from beyond Earth is much more complex than it sounds. First there is the problem of natural background noise, both terrestrial and cosmic. Every radio-based receiver on Earth is constantly bombarded by electromagnetic radiation, or "radio frequency" (RF) noise. Tune your radio or TV off of your favorite channel, and the static you hear (and see on your TV as "snow") is known as "white noise", and is the reception of this random radiation. Our TV sets and radios work by tuning to specific frequencies were we are intentionally transmitting radio waves with a stronger signal.

Another way of looking at this is by using the RF receivers in every human being; our own eyes. Our eyes are also bombarded by all of the same electromagnetic radiation that reaches our planet. However, we are only able to "tune into" the frequency between infrared (400 terahertz) and ultraviolet (750 terahertz), which we perceive as visible light, broadcast eight minutes ago from that fiery radio station we call the Sun.

Secondly, since an ET signal would be very distant, it would be relatively weak. Moreover, it would presumably be weaker than the light that would be visible to us from the star their planet orbits. In order for us to detect their signal, we would have to filter out the radiation from their sun and listen with a large enough radio telescope to be able to detect it.

There are only a handful of radio telescopes on our planet large enough to detect deep space transmissions. The largest and therefore most sensitive radio telescope on Earth is located at Arecibo, Puerto Rico. The Arecibo Observatory is a part of the National Astronomy and Ionosphere Center (NAIC), which is operated by Cornell University and the National Science Foundation. Scientists all over the world compete for time using the facilities for the research. SETI projects are but a small part of that research.

For the most part, SETI projects like Project Phoenix rent time on different radio telescopes around the world and are therefore targeted searches. These different locations provide good targets for detailed investigations of small areas of the sky.

Other SETI projects, like UC Berkeley's Project SERENDIP piggyback an extra receiver onto the Arecibo radio telescope and then analyze all of the signals it receives. This allows them more time to use the telescope, and gives them a greater view of the sky, but they have no control over which targets are studied.

The Allen Telescope Array, being built by the SETI Institute northeast of San Francisco, is a new radio telescope that will be totally dedicated to SETI research. This project is projected to cost about $26 million.

All of these projects suffer from a lack of funding due to this being a controversial scientific endeavor. This lack of funding and support has seen the demise of many SETI projects. The most famous perhaps is the Ohio State "Big Ear" project.

This project was launched in 1973 at Ohio State University. In August 1977 their telescope detected a powerful signal. It rose in intensity and then fell away over a period of 72 seconds. This signal would become famous as the "Wow" signal. The duration is significant since their telescope's beam was fixed, the Earth's rotation allowed the signal to pass through the beam's scope, was strongest at the beam's center, and then trailed off as the Earth continued its spin. This made it appear to be a very credible signal.

However, there were two beams at OSU, so the signal should have disappeared for the 3-minute interval between the beams, and then registered on the other for 72 seconds. It did not do so, though this could be attributed the signal perhaps being periodic and the initial pass was a lucky find at the end of the signal. A decade of research has neither discredited this as a potential hoax, nor proven it to have been a definite ET signal, because it was never found again. Sadly, in 1997 "Big Ear" was shut down, and the land was bought and turned into a golf course.

Other projects, like NASA's High-resolution Microwave Survey (HRMS) was launched by NASA in 1982 and showed much promise because it had the backing of NASA's technological experience and funding behind it. But it was discontinued in 1993 when the U.S. Congress cut its funding. In 1995 however, the independent SETI Institute (http://www.setiinst. edu) picked up where NASA left off and created Project Phoenix, the name symbolizing the resurrection of the project.

In 1999, scientists working on Berkeley's Project SERENDIP recognized that they did not have enough computing power to analyze the massive amounts of data they were getting from the Arecibo radio telescope. They could not invest in a large bank of supercomputers to handle the load, so they created a very unique solution.

They designed a distributed computing platform that allows standard desktop computers networked together over the internet to download packets of data, analyze it in the background or while not busy with other tasks, and then send the results of the analysis back to UC Berkeley. The project has become known as SETI@Home. 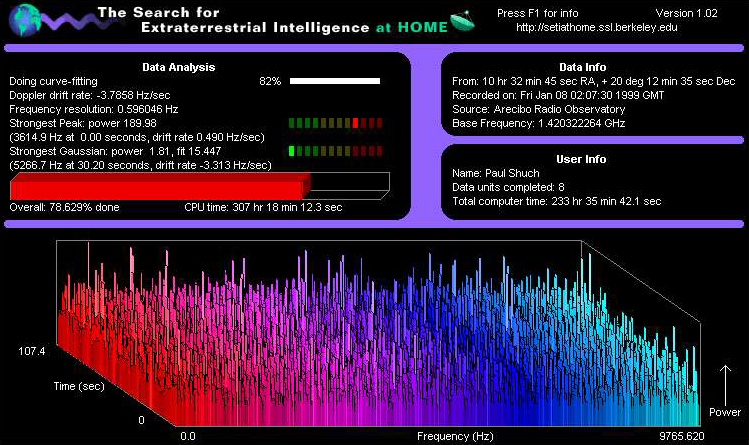 The software can be downloaded for free from https://setiathome.berkeley.edu and works on virtually any PC (there are versions for Windows 95-XP, Mac, UNIX, OS/2, and more). It primarily runs as a screensaver, thus allowing it to run while you are away from your computer. Computers with memory and CPU to spare can actually run it as a background task.

The software downloads a chunk of the data (about 100 seconds worth) to your PC from the Internet. It can do this over a LAN or with a modem by connecting for you automatically, or waiting until you are connected. Depending on how fast your PC is, the software can analyze that block in about 10 to 20 hours. Afterwards, it uploads the results and downloads another chunk.

Over the last five years, my PC has processed over 500 chunks of data. It makes a fascinating screen saver, one that always starts a conversation. It does provide a lot of interesting details graphically to let you see the various signal spikes it finds.

To my knowledge, we haven't found ET yet. Not with SETI@Home, or any other projects out there. But if I may be allowed to quote Eric Idle, from Monty Python's The Meaning of Life, "Pray that there's intelligent life somewhere out in space, 'cause there's bugger all down here on Earth!"

By Dan Shaurette
Member Since: Jul 25, 2017
FOLLOW
Author of Lilith's Love, Black Magic, and Once Upon a Scream.
COMMENTS
Log in to post a comment. (Easy one-click login with Google or Facebook)
HAUNTED HISTORY: THE HOTEL SAN CARLOS
WHO YA GONNA CALL?
FALLEN HALO
THIS BLACK HOLE IS ONE OF THE BIGGEST EVER FOUND