10 Sex Symbols Who Fell From Grace 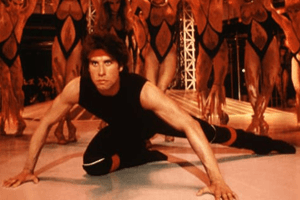 But beauty and sex appeal are fleeting, as this montage shows. Here's a list of 10 celebrities (5 men, 5 women) who were once sex symbols and who have since fallen from grace. 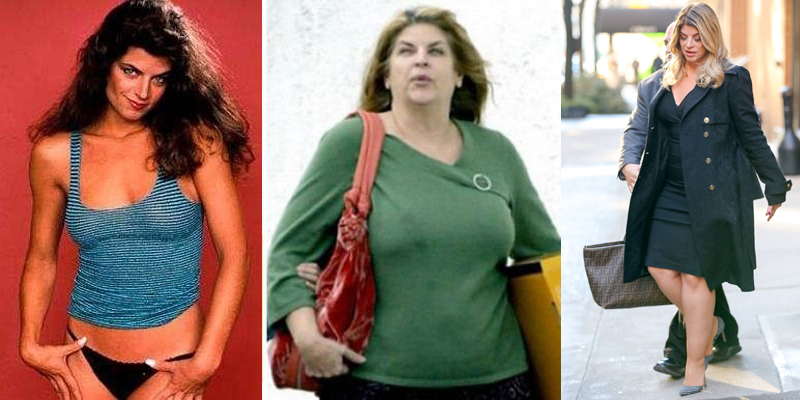 Kirstie Alley's big break came in 1982 when she appeared in Star Trek II: The Wrath of Khan. She played the attractive, logical, vulcan Saavik. But it would be 5 years later when she landed a recurring role in Cheers that she won our hearts. Her fame skyrocketed and she appeared in numerous movies, the most notable being the Look Who's Talking series between 1989 and 1993.

Her battles with weight gain have been very public. She has gained weight, lost weight, then gained it again many times. Between 2004 to 2007 she was the spokeswoman for Jenny Craig. During this period she lost 75 pounds and brought her weight down to 145 pounds. In May of 2009 Kirstie Alley told People magazine that after parting ways with Jenny Craig, she gained back 83 pounds and weighed as much as 228 pounds.

In 2005 she starred in the short lived TV show Fat Actress (7 episodes). She played a character that mirrored her own life and poked fun at many of the things she had been going through.

In 2010 she invited cameras into her home for the TV reality series, Kirstie Alley's Big Life (12 episodes). The show centered around her ongoing weight loss battle.

In 2011 she appeared on Dancing with the Stars and quickly became a fan favorite. She lost weight, week after week, while rehearsing and performing on the show.


Today it appears that Kirstie has put the weight back on. The picture at far right was taken in January of 2017. 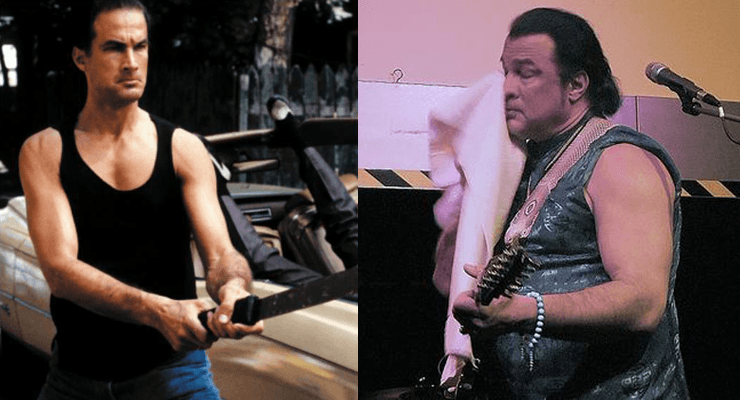 Steven Seagal rose to fame in the 1980s after several successful (although B) action movies. The quality of his movies improved in the 1990s and he became a star and sex symbol. Tough and gritty defined Seagal and it came through in his movies.

In the 2000s Seagal started putting on weight and by the 2010s he was obese. He's been in over 40 movies so far, although today his work has shifted more toward music, screenwriting, producing, and directing. 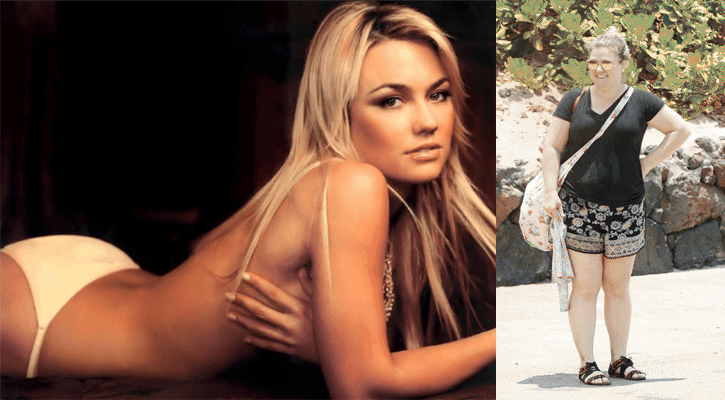 Kelly Clarkson rose to fame after winning the inaugural season of the TV series American Idol in 2002. Being the first, she went on to release numerous albums and became an actress on both the small and silver screen. Hot, young, and sexy, she captured the hearts of America and the world.

Like Kirstie Alley, her cycle of weight gain and weight loss has been the focus of much public attention. 15 years since her American Idol win and 2 children later, she has settled down into a heavier figure. The picture at right was taken in 2017. 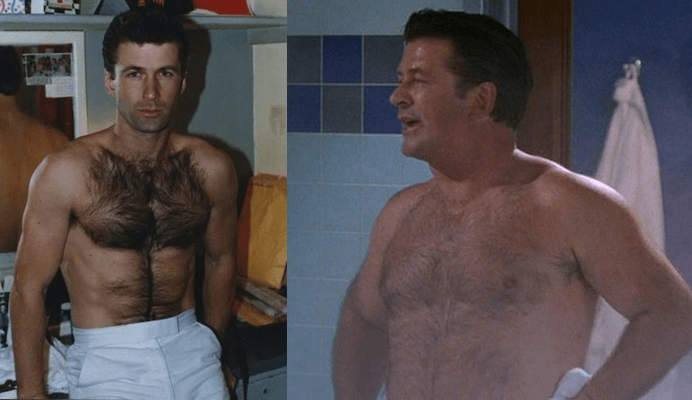 Alec Baldwin became a sex symbol in the 1980s after numerous hit movies. He was so successful, his brothers managed to ride his coattails and establish Hollywood (although lesser) careers. At the peak of his fame he married the bombshell actress Kim Basinger. Men wanted to be Alec Balwin, women wanted to sleep with Alec Baldwin.

In the 2000s he started putting on weight and by the early 2010s he was obese. In 2012 he announced that he was prediabetic. He said in numerous interviews that his diet was sugar, sugar, sugar! 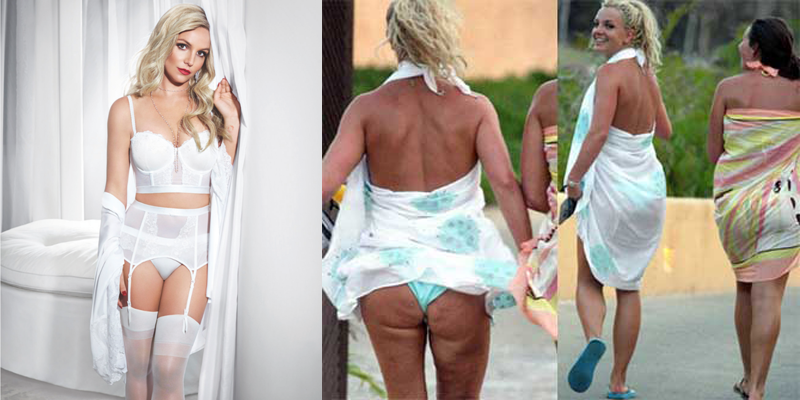 Britney Spears rose to fame in 1999 after her single Baby One More Time quickly rose to #1 on the pop charts. The single sold 500,000 copies on its first day and catapulted Britney into stardom. She is credited with ushering in a new era of pop stars where brand and image became the number one priority. 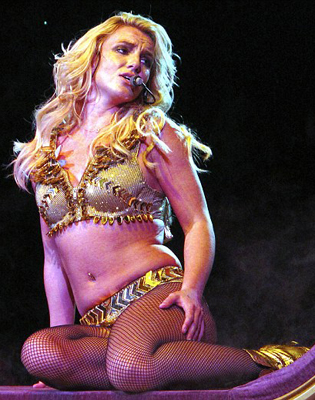 Britney performing Toxic, Stronger, (You Drive Me) Crazy and
Till The World Ends at Planet Hollywood, Las Vegas, 2014
Since around 2009 Brittany has been on the weight gain, weight loss merry-go-round. In 2015 she underwent a new exercise regimen and dropped a few pounds, but she's never recovered the body she had in the late 1990s. 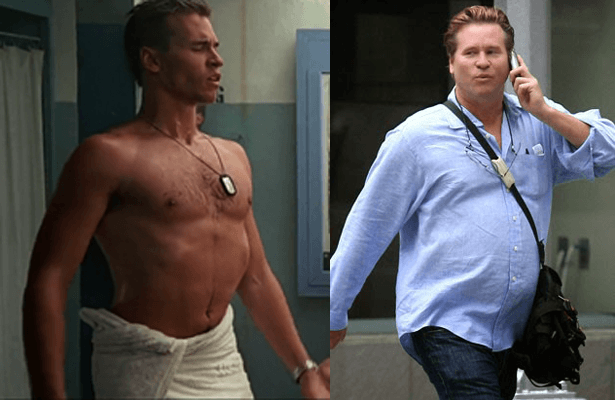 Hit movies Top Gun and Batman Forever established sexy Val Kilmer as a sex symbol throughout the mid 1980s and 1990s. In 1993 he won an Oscar for Best Supporting Actor in Tombstone. To this day he has had a very successful career and is currently working on the title Mark Twain and Mary Baker Eddy, which he wrote, stars in, and is directing.

In the late 2000s he started bulking up and by 2015 he was obese. In October of 2015, Val was hospitalized and rumored to be near death. He had a tumor in his throat for which he was refusing traditional treatments. Since his illness (and recovery) he has shed many pounds. Cancer is one way to drop weight. 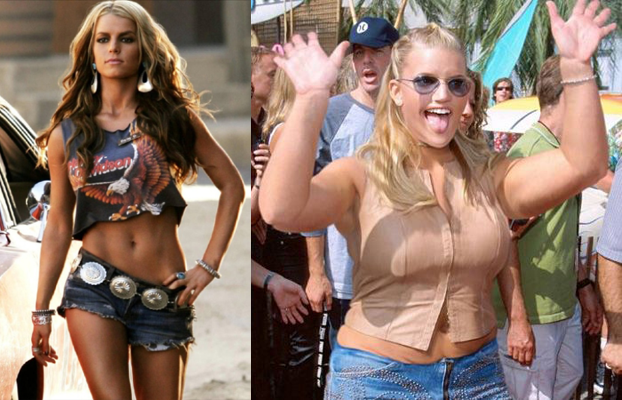 1990s pop star and actress Jessica Simpson was an instant sex symbol. Her father once said of her, "Jessica never tries to be sexy. She just is sexy. If you put her in a T-shirt or you put her in a bustier, she's sexy in both. She's got double D's! You can't cover those suckers up!"

She starred in the retro film Dukes of Hazzard in 2005 and still had her rock-hard body. Those closest to her said she was in the best shape of her life, and it really came out in the film. However, it wasn't destined to last.

Later that year she split from long-time partner and lover Nick Lachey (1998-2005). Her weight gain began and she never truly recovered. Two children further complicated her weight issues. In 2014 she appeared in a Weight Watchers commercial where she is shown loosing 50 pounds after giving birth to her second child.

Today she has slimmed down, but she's no longer Daisy Duke. 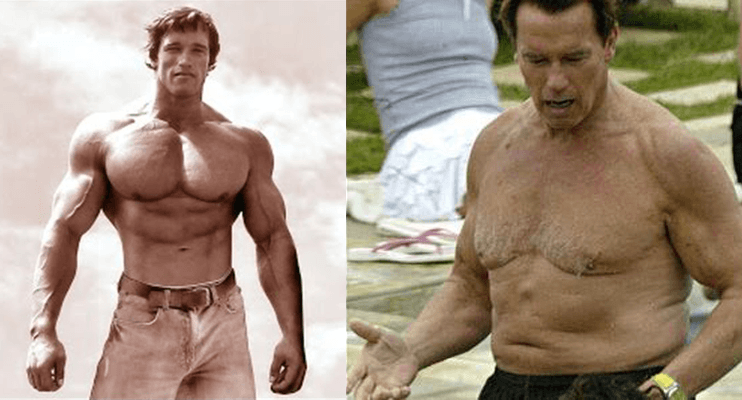 7 time Mr. Olympia champion, 5 time Mr. Universe champion, 2 time California governor, and actor Arnold Schwarzenegger has been in the media spotlight since the early 1970s. His career (like most in Hollywood) has had its ups and downs, but like the true champion he is, he continues to persevere.


The picture at right got out in 2009 when he was 62 years old. Today he is 70 (Arnold was born July 30, 1947) and he continues to champion fitness and personal health. He looks more in-shape today than when he was in his early 60s. At the time he was going through some intense personal issues with his family, so his lapse in physique is understandable. 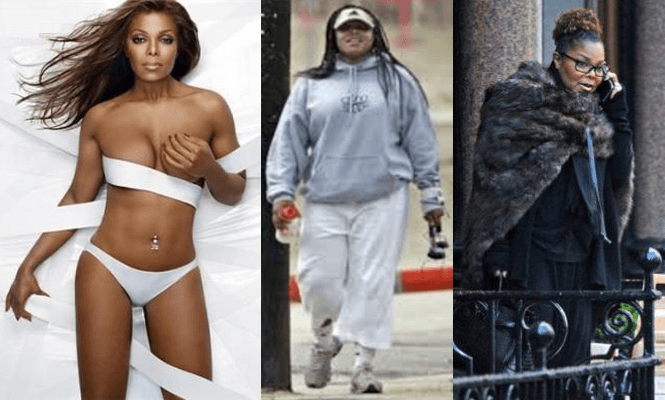 Janet Jackson is a singer, songwriter, dancer and actress. She is known for her innovative, socially conscious, and sexually provocative elaborate stage shows. She performed during the 2013 Superbowl half time show with Justin Timberlake and had a wardrobe malfunction. She has been a prominent figure in pop culture for almost 40 years.

Janet Jackson's wardrobe malfunction
With time and age have come a few extra pounds. She's still a beautiful woman, but she's a shadow of her former self. 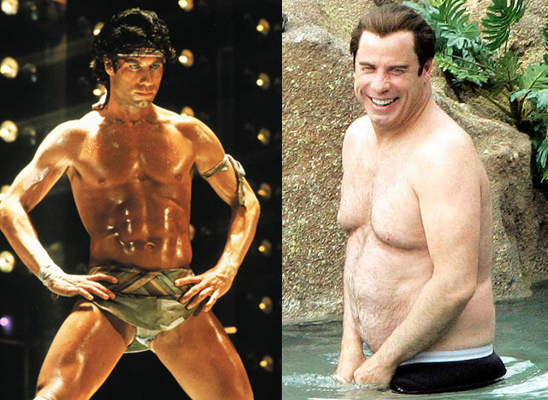 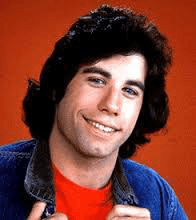 The cleft chin of John Travolta
Launched into fame as Vinnie Barbarino in the 1970s hit TV show Welcome Back Kotter, John Travolta has maintained a long and successful acting career. He became a sex symbol after his movies Saturday Night Fever (1977), Grease (1978), Urban Cowboy (1980), and Staying Alive (1983). His cleft chin also became famous, leaving men around the world wondering how they could get one. 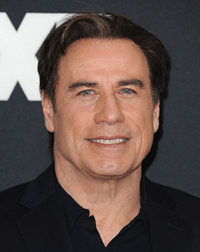 John Travolta in 2017
But as is so often the case with success and security, weight gain often follows. In the mid 2000s he slowly started putting on weight. His trademark cleft chin began to vanish and today it is hardly visible. Even so, we still love you John Travolta.
+1

By Andrea Smith
Member Since: Aug 17, 2017
FOLLOW
Andrea Smith is a Hollywood and Entertainment writer.
COMMENTS
Log in to post a comment. (Easy one-click login with Google or Facebook)
WHAT IS GOTH?
SPOCK HAS BEEN CAST IN STAR TREK: DISCOVERY
THE PENDULUM
WILL MICROSOFT START CHARGING A MONTHLY FEE FOR WINDOWS 10?