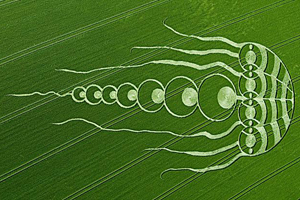 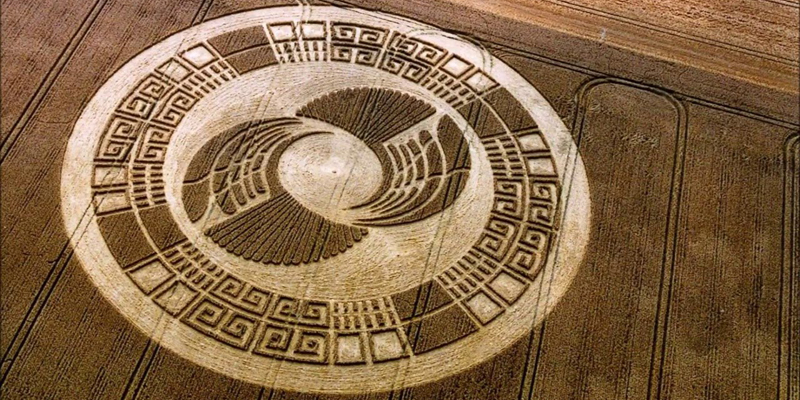 Since before the release of M. Night Shymalan's Signs in 2002 crop circles have been a part of pop culture. Thousands are reported every year in over 70 countries. There is no doubt that these peculiar designs have been popping up in fields all over the world. But are they, as the movie suggests, an intricate mapping system used by extra terrestrials?

First lets delve into the history of crop circles. What are they exactly? Crop circles are unexplained designs that are created over the span of one night. They occur in a field of organic material or snow in which an impression can be made. Though the earliest known formation was in 1647, significant numbers began to appear in the early 1970's. These early circles were comprised of individual circles swirled in either a clockwise or counterclockwise direction. A major change came in 1990 when the circles became complex pictographs composed of straight lines, angles, and spiral rings. 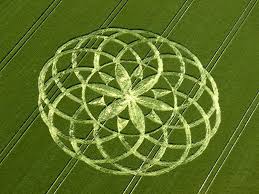 Crop circle societies have been developed to study this phenomena and determine their meanings and origins. These societies put forth wide-ranging theories about crop circles that span from elaborate hoaxes to a God force. One thing is clear. These societies have a problem agreeing on a method to test the validity of a formation. Due to the complexity of the patterns, some theories that imply a hoax or chemical reaction have been ruled out by most societies due to the molecular change that is found in the affected plants. One of the more popular theories was the Plasma Vortex Theory. A theory proposed by Dr. Terrence Meaden in the 1980's which attempted to explain spirally generated circle patterns as a product of natural atmospheric phenomena. Meaden compared the vortex to such natural happenings as dust devils and tornadoes, but also including friction-generated plasma that accounted for the anomalous light phenomena, which many eyewitnesses had seen. Meaden claimed the forces involved were until this time "unrecognized helical or toroidal forces" which had "subsidiary electromagnetic properties due to self-electrification." The vortex would apparently form high above the ground, then suddenly "breakdown" to the ground level in an axial strike, much like lightning. The theory was reasonable for a number of years, with further corroboration obtained in Japan by Dr. Y.H. Ohtsuki and Professor H. Ofuruton. Their lab research produced similar vortices by electrostatic discharge and microwave interference. Professor H. Kikuchi of Japan carried out theoretical work on the plasma-vortex theory. He modeled the vortex using energy potentials including an interaction term between an axial electric field and the earth's magnetic field. 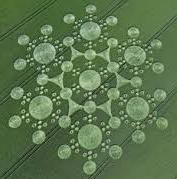 The new intricacies of the patterns has led to new theories that have been developed to support the lines and angles used in crop formations. The Gaia Hypothesis by James Lovelock is one such theory. In summary it says that the Earth itself is using its own energy in order to create crop formations. The purpose being to send the inhabitants of Earth a message. What that message may be, Lovelock doesn't know. "The Earth," he says, "Behaves as if it were a super organism, made up from all the living things and from their material environment." Many speculate that the earth is trying to warn us about our damaging practices. If that is the message Earth is trying to get across it certainly is not a clear one. Perhaps instead of making undecipherable symbols in fields it should focus its energy and zap the pollutant directly.

All theories have the same basic downfall as the theory we see here. At some point, they break down. We find a person looking for connections other than UFO because UFO validity is something that is hard to test. The only proof there is of this being connected to the UFO phenomena are the accounts of both being seen in the same area. Perhaps we will have sifted through all the theories and hypothesis before something catastrophic shows us just where this phenomena originates and what it means. Whatever the cause, for now farmers are generally elated to have their fields "plagued" with this phenomena, because in the year following the crop occurrence their yields typically increase 30-40%. So Gaia or Aliens please continue to send us your message and we will continue to reap the benefits.

By Atreyana Star
Member Since: Jul 25, 2017
FOLLOW
COMMENTS
Log in to post a comment. (Easy one-click login with Google or Facebook)
PRESIDENT TRUMP CALLS OUT MEDIA ON BIASED CLINTON URANIUM ONE COVERAGE
TESS IS NASA'S NEXT EXOPLANET SPACE TELESCOPE
ONCE IN A BLUE MOON
HAUNTED HISTORY: THE HOTEL SAN CARLOS