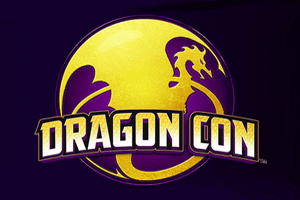 2,592 Shares
For the uninformed few who don't know what Dragon Con is, it's a yearly convention held in Atlanta, Georgia. The theme is anything sci-fi, comic, or gaming related. Over 20,000 people attended this year's convention. This was my fifth con, and not to be my last. Try to imagine a sea of people, most of who are in costume. Bands were abundant this year. Some of the more notable ones were Voltaire, The Last Dance, Godhead, and Lost Boys. You can go blind from all the camera flashes. 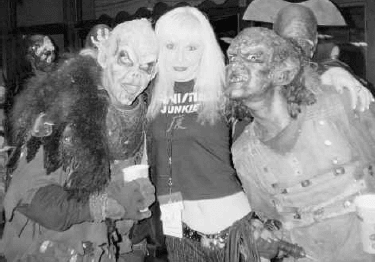 So it begins. One pretty blonde in a sea of thousands. I'm looking for something. That rare anime toy, a captain Kirk bobble head doll, James Marsters... 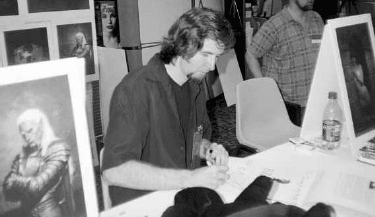 The artist Brom
My first stop was at the booth of one of my favorite artists, Brom. He autographed for me a calendar that contained some of his prints. Brom got his professional start when TSR hired him at the age of twenty-four. For the next three years he would work as an illustrator in the highly successful Dark Sun world. Since then he has worked in all aspects of graphic illustration including novels (Micheal Moorcock, Terry Brooks, E.R. Burroughs), role-playing (TSR, White Wolf), comics (DC, Chaos, Dark Horse), video games (Doom 2, Diablo 2, Sega, Activision), and film (Sleepy Hollow, Galaxy Quest, Bless the Child, Ghosts of Mars).

I found Brom warm and inviting, with a little bit of devil behind his smile. Check him out and see his vision for yourself.

My next stop was the booth of Joseph Michael Linsner. This was a true delight. You might know him best from Dawn Comics. Besides that, he has the sexiest pinup girls dressed in vampire splendor that you will ever see. I have several on my walls and so should you! 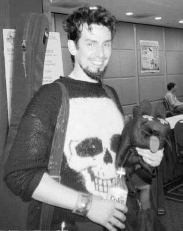 The artist Voltaire
Voltaire was my next adventure. Any true Goth doll knows who Voltaire is. I was sure to get a picture of him holding my pussy. He has just released a new song called, You know you're Goth when. 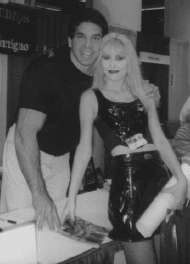 It was quite fascinating to observe all the little teenie-boppers who followed James around like lost puppy dogs. A few even tried to follow him into the restroom. More than a couple asked him to take off his shirt. I did not get why they wanted him shirtless. I did not get his band, Ghost of the Robot. Maybe if he had sung naked the performance would have left a better taste in my mouth. However he was fully clothed, and when on stage he just stood in front of the microphone with hardly any stage presence whatsoever. He looked like Billy Idol without movement. Every song sounded the same. But, the teenieboppers didn't care. They were everywhere cheering him on. I suppose the moral of the story is if you do one really good on-camera sex scene you will have a loyal teeniebopper following forever. 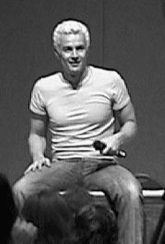 James Marsters
Although I didn't quite enjoy James Marsters, I do look forward to seeing him in upcoming season of Angel. I trust the writers of the show will have the wisdom to not script any singing scenes.

All and all it went well. From opening parade to closing ceremonies I had a good time. I could write one long continuous bitch about the security company who went far out of their way to annoy a bunch of geeks who came to catch a glimpse of David (Kung Fu) Carradine or the friendly giant Richard Keil, but I won't.

Some people came for live role play. Some came for computer gaming. Some were simply fans of art, music, or comics. Some came for geeky fun (I'm in this category). If you didn't get a chance to experience the con this year you should attend next time around. I'll be there. Look out for the tall blonde in platform shoes running from the security nazi's. They're easy to spot. If you're blind you'll hear them yelling, "Make a hole!" about every 15 minutes.