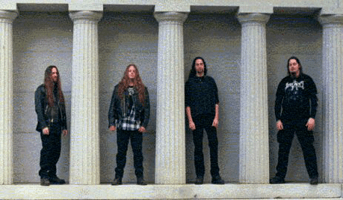 The forefront of the Philadelphia Death Metal scene sounds like a freak experiment when someone tried to splice Bleeding Through and Slayer, and whose members look like the type of guy who would be knocking you down in a mosh pit. With powerful guitar riffs, heavy bass lines, some serious hardcore drumming and a voice who you'd swear was Lucifer himself at times, Carnivean indeed leads the Philadelphia Death Metal scene.

These guys are serious about hardcore metal. The band itself is new to the scene, 94 WYSP just started playing their songs on January 28th. However, its members are far from new to the local music scene in Philadelphia.

The band started in the late 1990's, when fate brought four men from the punk, speed metal, death metal and classical music scenes together to create Carnivean, a symphony of dark, hardcore, goodness. As their website states, "Using crafty time changes, song structures, and incorporating eerie melodies with crushing brutality, Carnivean hopes to lay sonic waste to the musical underground. YOUR EARS WILL BLEED!!" I couldn't put it into any better words than that. This union of darkness that Carnivean has created is currently taking the Philadelphia area by storm! Their debut CD, In Todes Banden, is available now on their website, http://www.carnivean.com.

By Tom Scott
Member Since: Aug 07, 2017
FOLLOW
Former station manager of UndeadRadio.com.
COMMENTS
Log in to post a comment. (Easy one-click login with Google or Facebook)
GOTHIC MUSIC AND CHEESESTEAKS
TEACHINGS OF THE MAJOR RELIGIONS
WHO YA GONNA CALL?
IS SILVER AN ANTIBIOTIC ALTERNATIVE?