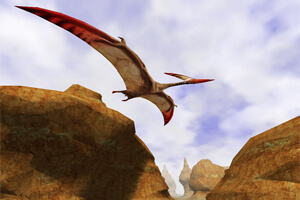 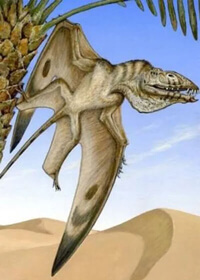 Artist rendition of the find
In northeastern Utah an amazing pterodactyl fossil has been found. 210 million years old, this creature had a large pelican-like pouch with big teeth and a 150 centimeter wingspan. According to a new study, it was possibly the first flying vertebrate to evolve on Earth.

Before this find pterodactyls weren’t thought to be alive on Earth that long ago. This new find puts them on Earth 65 million years earlier than previously thought. This creature lived during the Triassic period and its fossil is amazingly well-preserved. Most pterodactyl fossils previously found are badly mangled. Its uncommon to find more than a single bone. But this fossil has an almost fully-intact skull. It was unearthed at Saints and Sinners Quarry in Utah and was preserved in sandstone.

Brooks Britt, a geologist at Brigham Young University said, “For this animal, we have the sides of the face and the complete roof of the skull, including the brain case, complete lower jaws and part of the wing.”

Pelicans use their pouch to store fish for eating later, but this creature didn’t do that. It roamed the desert where fish were near impossible to find. Scientists think the pouch could have been used to store other desert-dwelling reptile prey. Another possibility is the pouch was used to make vocal sounds to attract mates. 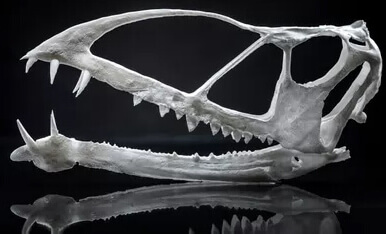 A 3D printed skull based on the fossil found.
Prior to this discovery there have been only 30 known Triassic period pterodactyl fossils found. None lived in desert regions, which means these early pterodactyls were hardy and lived in a variety of climates. Most of the specimens previously discovered were in the Alps.

Britt’s study was published in the peer-reviewed journal Nature Ecology and Evolution.
+0