New Book about the Phoenix Lights 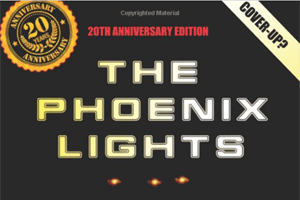 2,556 Shares
“Are these entities aware of what may lie ahead for us, trying to warn us to change our violent, destructive ways before it is too late? Are they affecting our collective consciousness by waking us up to this reality, one person at a time? In any case, from my own UP [Unexplained Phenomena] experiences and certainly from all the volumes of verification I was gathering from experts and other experiencers, I was coming to believe that there is a connection to something out there just waiting to be grasped by each one of us.”
Excerpt from The Phoenix Lights by Lynne D. Kitei, M.D. 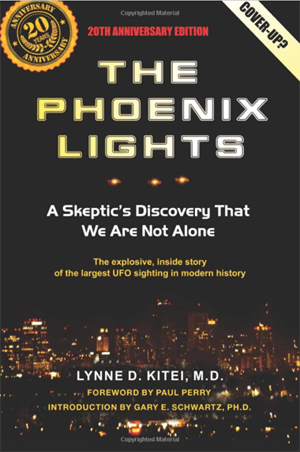 As the editor of Acrimony, I can't help but read things with an editorial eye. I try not too, but it's no use. I'm a stickler for spelling and grammar and if a sentence doesn't read properly, I want to rewrite it.

I was sent an advance copy of the new book "The Phoenix Lights: A Skeptic's Discovery That We Are Not Alone" for review. I was immediately interested in the subject material. Since the Phoenix Light phenomena began on March 13th, 1997, there has been a global awakening to the plausible presence and existence of UFO's. I began reading the book immediately.

The book starts out well, however it becomes instantly clear that the author is not a professional writer. A doctor by trade, Dr. Lynne Kitei writes as if the book is a technical manual. The first hundred pages involve the progression of the phenomena and how skeptical she is of the entire event. She goes to overwhelming lengths to illustrate that she is not a crackpot. When she interviews other witnesses she is always prudent in stating their profession and stature in the community. She is obsessed with showing that she is credible.

If you can get past the first half of the book, it gets better. The conclusions she draws about the real intention of UFO's and the Phoenix Lights phenomena are impressive - almost inspired. The entire tone of the book changes and it makes one wish that tone had existed from the start. It is as if a totally different author is writing the second half.

I won't go into what her conclusions are. You'll have to buy the book if you want to find out. But I think the message she presents is a good one. Good from a personal, cosmic, spiritual, and universal standpoint. Additionally, even though the first half of the book is at times a difficult read, the work is a comprehensive account of how the Phoenix Lights phenomena unfolded. It is very detailed in its representation of events and offers numerous photographs and other documentation.

Amazon.com is selling the book for $11.87 and used copies are already being offered for $7.95. A fair price and worthy addition to your paranormal library.