2,557 Shares
When most people hear the word speakeasy they think of Al Capone and prohibition. In reality however, the term can be traced to the early 1800s. To gain entrance into one of these establishments you had to speak easy and then provide the name of whoever it was that sent you. Quite often speakeasies were masqueraded by legitimate businesses such as barbershops or hardware stores.

After nearly 100 years of lobbying, temperance societies finally got their way when the 18th amendment to the constitution was ratified in 1919. This amendment provided for the prohibition of alcohol. Further legislation such as the Volstead Act of 1920 provided for the enforcement of prohibition. The public was behind such legislation during the early twenties but public opinion was soon to change.

In a relatively short amount of time arrests for public drunkenness fell, overall liquor consumption dropped, and the price for bootleg alcohol skyrocketed to prices the ordinary laborer could no longer afford. During this same period there was a growing disobedience towards the law and law enforcement officials.

The speakeasy blossomed during this era. Operated and funded by organized crime,these underground establishments met the demand of public. Illegal liquor dropped to affordable prices and newer upscale clubs opened. It was not only socially acceptable, it was socially desirable to attend one of these establishments.

The success of the speakeasy lead to its eventual demise. It was soon obvious to government officials that prohibition had failed and there was no hope for its enforcement. Thirteen years after the ratification of the 18th amendment the 21st amendment was ratified repealing prohibition. The popularity of the speakeasy once again dwindled as legitimate establishments reopened and liquor prices dropped further.

Today the average speakeasy isn't as glamorous as the establishments ran eighty years ago by Al Capone. They tend to be dank and dreary and don't discriminate much in regard to age admission. Quite often anything goes and it's not uncommon to witness open illicit drug use or public sexual acts. These modern day speakeasies can't compete with legitimate establishments so they often open up when taverns close and stay open until dawn. Today they are more often called after-hours clubs than speakeasies.

It's been ten years since I went to an after-hours club. In 1993 I was at a club that got raided and the result was a $150 ticket. I decided right there and then that my late night partying days had come to an end.

A few weeks ago I got a call. It was an invitation to a speakeasy where a local band I knew was playing. After careful consideration I decided to take the risk and go see the group. 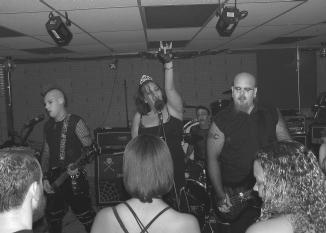 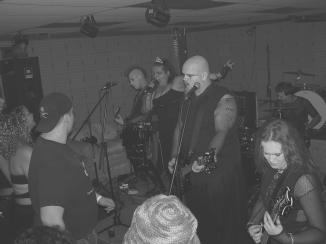 The event started at midnight. Following the directions I was given I soon ended up on Phoenix's south side in an industrial slum. The streetlights were dim. If not for the illumination of the 24-hour pornography shop across the street it would have been near pitch black. I found the location and turned my car towards the gated fence. A multi-pierced, leather-clad, intimidating large looking man stood watch. After peering into my car and giving me the once over he asked me who I was here to see. I said, "DeSade." He nodded, opened the gate, and I drove in.

Just as with speakeasies of old, this one was fronted by a legitimate business. At least it appeared that way from the outside. But once indoors it was definitely a club complete with bar, lounge seating, and a stage. I arrived a little late and DeSade was already on the stage.

I discovered DeSade in 2000. The first time I saw them live was at a New Year's Eve show later that year. They always put on a unique energetic performance. Fronted by female rocker Sarah Deathriage and backed by guitarist John Black, the group effectively combines Death Rock, Punk, and Goth into a nice package.

Sarah often looks as if she is having stage sex with her audience during her performances. There is no doubt she enjoys to perform. She loves the attention.

John Black and Lilly Idle provide the guitar riffs. J. Grimm and Travis Edge provide the bass and drums respectively. This group has gone through a number of lineup changes over the years but as fate would have it, Grimm and Edge were founding members who found their way back to DeSade in 2001.

John Black
DeSade has a loyal local following and I spot familiar faces in the crowd. Their set is short and by 1 a.m. they are off the stage. At this point I am feeling unusually chipper. I realize the abundance of marijuana smoke in the air is having an effect on me. A pretty lady passes by offering cupcakes. I greedily take one hoping to stave off the inevitable munchies.

A few minutes later the next act takes the stage, The MadCaps. This group may be one of Phoenix's best-kept secrets. It's a three-man band (well, two men and a woman) and traditionally I don't like three-man bands. Playing lead guitar and singing vocals is usually too much for anyone to handle effectively, yet John Logan does it well. So well that he may be better suited as just lead guitarist.

Christina Nunez plays bass and brings her own brand of attitude to the show. With cigarette barely hanging off the tip of her lower lip, she caresses her axe and coaxes deep pounding tones into the club. She's having a good time up there, it's easy to see.

Artie Cassidy rounds out the group on drums. Only later do I find out this band belongs to the dying guild of guerilla rock. In addition to their scheduled shows they regularly roll up on venues and play in the parking lot out of the back of a pickup truck. It's this dedication that has made Phoenix recognize the band. 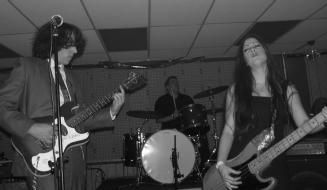 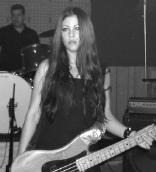 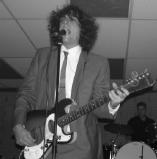 John Logan
The MadCaps do a short set like the group before them and once again the stage is bare save stage handlers who prepare for the next act. I take the opportunity that the silence brings to intermingle and chat with the crowd. My eyes are now freely watering from the smoke filled club.

The final group of the evening is The Glass Heroes. This band has been around the Phoenix scene for years and their experience shows. They have real stage presence. Keith Jackson fronts the group and delivers solid vocals. Steve Shelton plays lead guitar. He is obviously constrained on the small stage, wanting to break out and gyrate if space were only available. His riffs are clean and the experience of the group again shows. The band is rounded out by Steve Davis on bass and Ad Adams on drums. 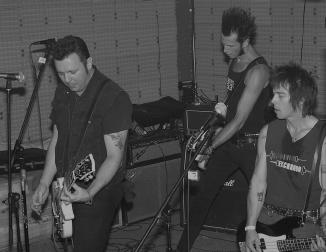 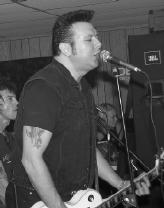 Keith Jackson
What makes The Glass Heroes stand out among other punk bands is that these guys can play their instruments. They prove that you don't have to compromise the quality of music in order to play punk. Their songs are well crafted and their playing stands out.

When it's all over I realize just how late it is. Wanting to be home before sunrise I say my goodbyes and head for my car. While driving off I think about my fortune in not being involved in another speakeasy raid. This is not something I would want to do every weekend, at least not anymore now that I am in my thirties, but it was a fun night. It was raw and unadulterated. For a short time I broke the rules of society and partook of bootleg liquor and inadvertently inhaled marijuana. And to top it all off I got to see and hear three great bands perform. The speakeasy lives on.

The MadCap's official webpage is here.

To find a speakeasy near you slip a $20 to your local bartender and inquire.