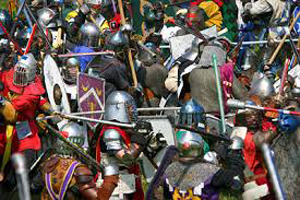 2,592 Shares
"Be careful of what paradise you deal
What hope you make other dreamers feel
For if too many hear it,
They will struggle to draw near it
And in the search they just might make it real!" 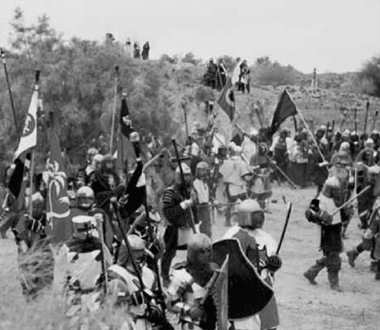 Hus Langskipp Guards marching into battle
along side their allies, Wulfs Rudel.
(Estrella War XVII, February, A.S. XXXV-2001)
Have you ever felt as if you were "born too late", as if you didn't fit into this modern world? Have you ever practiced genealogy in order to trace your roots, to find out the history of your family? Have you ever picked up a history book, or one on architecture and the arts and felt like you belonged there and not here? Do you instantly connect with movies about Camelot, knights in shining armor, or Robin Hood? Perhaps you are fascinated by the Renaissance period, or the tales of Vikings, or great epics such as Tolkien's tales of Middle Earth.

Then perhaps you would be interested in knowing there is a subculture of people who share their mundane lives with time in what they call The Current Middle Ages. These people are members of a worldwide organization known as the Society for Creative Anachronism. Do not mistake that last word - it is not Anarchism, for the SCA is definitely not full of anarchy. Quite the opposite, it modeled after the feudal societies that ruled medieval Europe. The "Knowne World" of the SCA consists of seventeen Kingdoms, each further containing Baronies, Shires, Colleges, Clans, Households, and so on.

Anachronism is a word that means "outdated" or "relic". Essentially they are a historical re-enactment and research group, similar to the "American Civil War Reenacters". However the SCA concentrates on the recreation of the European Middle Ages, before 1600 A.D. The SCA was incorporated as a non-profit organization in May of 1966, by a group of science fiction and fantasy fans in Berkeley, CA. Dates of events within the SCA have the designation of "A.S.", referring to "Anno Societatis", or Year of the Society, counting after that.

Virtually all facets of medieval society are studied and recreated, including dance, music and the arts, cooking and brewing, metalwork and jewelry, martial arts and weaponry, archery, and costuming. The latter is possibly the most important. For unless you are dressed in period costume, known as garb, you are said to be "naked". There are folks however who are known as Hospitaliers (or "Gold Keys"), who maintain a trunk of garb for those new to events. 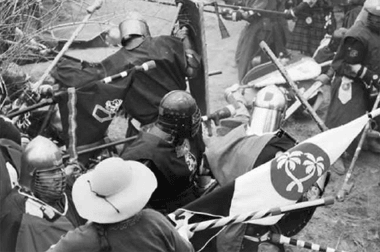 Hus Langskipp Guards and Wulfs Rudel at the center
of a counter charge, which helped win this battle.
(Estrella War XVII, February, A.S. XXXV-2001)
Not only is historical research a key to becoming good at whatever arts and sciences that you favor, but it is a requirement for creating a persona, which is your alterego within the SCA. When you register to become a member of the SCA, you must choose a name for yourself, design a personal coat of arms (or "device"), and give a historical background for your persona. There are many requirements involved for all of this, and it is no simple task, as it must be unique. However there are groups who will help the process along when you join. It is important to point out that you do not have to become a member of the SCA to enjoy its chivalry. It is estimated that for every registered member of the SCA in attendance at an event, there is an average of four others who are not.

The best way to discover what the SCA is really all about is to attend an event. Thanks to the Internet this has become quite simple. By clicking here you will be able to find a group in your hometown or one nearby. Before that, and truly even today, most people discovered the SCA when they attended a sci-fi convention or similar event.

Here in Arizona, the SCA has it's own history. In 1969, a group of folks from Phoenix went to a convention in Berkeley and discovered the SCA. When they returned to Phoenix, they started their own chapter. They chose the name Atenveldt, which comes from the name of the Egyptian Sun God "Aton" and the German word for valley or land, "veldt". The Kingdom of The West already was considered to extend to Arizona, so instead of becoming a new kingdom, the SCA created the very first barony - the Barony of Atenveldt.

It wasn't long however before Atenveldt grew to encompass members from Mexico to Montana. In 1970, the SCA designated them as the very first Principality and allowed for different baronies within it. Finally, in 1971, the Principality was so large that the SCA granted them the sovereignty to become the fourth Kingdom. There are now 17 distinct Kingdoms all over the world.

Today, the Kingdom of Atenveldt is limited to the borders of Arizona, and the Barony of Atenveldt is still the area of Central Metro Phoenix, but in the West Valley you will find the Barony of Sun Dragon and in the East Valley you will find the Barony of Twin Moons. There are also baronies in Tucson (Tir Ysgithr), Flagstaff (Ered Sul), and Sierra Vista (Mons Tonitrus). Each of our three major universities are the home to smaller groups called Colleges, and there are eight Shires as well within the Kingdom, including the Shire of Londinium ad Rubrum Flumen in Lake Havasu City where the London Bridge makes its home.

Each barony has its own events, on a yearly, monthly, and even weekly basis. The most common weekly events are the Fighter Practices at which many fighters get together, don their armor, and test out their weapons and skills. Often at Fighter Practice, like the Barony of Atenveldt's at Encanto Park, which is held every Wednesday night at 7PM, you will find jugglers, belly dancers, fighters, archers, and merchants selling their period costumes and wares. The last Wednesday of the month is reserved for Court Night, at which the Baron and Baroness hold court, announce business, and dispense awards. 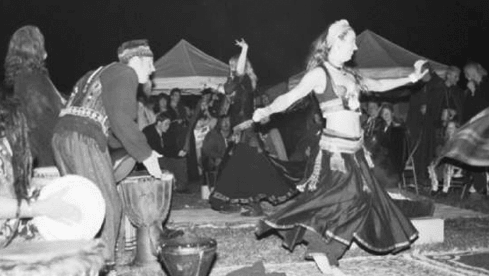 Members of Domba entertaining the crowd at the 2nd Annual Langskipp Cloven Fruit Revel.
(Estrella War XVII, February, A.S. XXXV-2001)
The largest event in Atenveldt is The Estrella War, so named after the Estrella Mountain Park at which it is held, out in Goodyear. The event celebrates its 20th year in 2004 and begins Wednesday February 11th and runs to Monday the 16th (President's Day, when the war site is torn down.) Estrella War has grown to become one of the largest events in the Knowne World, drawing visitors to camp there from virtually every Kingdom.

Estrella War is a huge tournament and camping grounds where people from different realms come together to meet, show off their skills, and enjoy the festivities. Everything that folks have learned and created throughout the year culminates with this event. It is full of competition, classes, dancing, feasting, singing with Bards, and shopping. There have even been Handfastings (marriages) held during Estrella War. To find out exactly where Estrella War is, how much admittance and parking are, etc., visit http://www.estrellawar.com and http://www.atenveldt.com.

The SCA is an ever-evolving organization, but it has always stood for revelry, festivity, honor, and chivalry. In a day and age when the modern world seems to have forgotten these ancient ideals, it is good to know that there are those that keep the Dream alive. 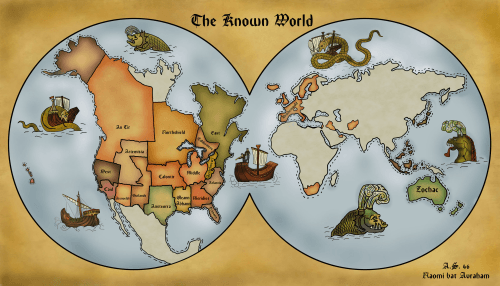 There are currently 20 Kingdoms in the Knowne World. you can find out more about each group and learn more about their individual baronies and groups here.

By Dan Shaurette
Member Since: Jul 25, 2017
FOLLOW
Author of Lilith's Love, Black Magic, and Once Upon a Scream.
COMMENTS
Log in to post a comment. (Easy one-click login with Google or Facebook)
LOPBURI, THE MONKEY KINGDOM OF THAILAND
RUSSIAN TEA CAKES
REVISITING THE PHOENIX LIGHTS
CADUCEUS