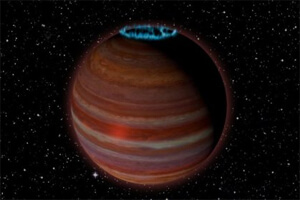 Artistic conception of SIMP J01365663+0933473
Credit: Caltech/Chuck Carter; NRAO/AUI/NSF
Astronomers keep finding new exoplanets. That is, planets that exist outside our own solar system. A recent discovery has astronomers stumped. The planet has been named SIMP J01365663+0933473 and several things make it stand out from other exoplanets that have been previously discovered.

Astronomers are certain this new planet is not a brown dwarf, that is, a failed star. Brown dwarfs have masses between 13 and 80 Jupiter masses. Brown dwarfs are not large enough to sustain nuclear fusion of hydrogen into helium. Brown dwarfs just don’t have enough gravity to compress the hydrogen in their cores. 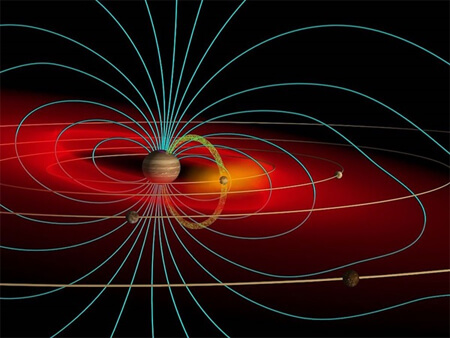 So why does this rogue Super-Jupiter have such a strong magnetic field? Scientists just don’t know. But further study of this new planet may expand our understanding of planetary and star dynamo mechanisms. That is, the inner workings of stars and very massive gas giants.

SIMP J01365663+0933473 is thought to be about 200 million years old. That’s very young on a cosmic scale. It sits about 20 light-years from Earth, so it’s also pretty nearby on a cosmic scale. Its surface temperature is thought to be around 1,500 degrees Fahrenheit. Our own Sun has a surface temperature of around 10,000 degrees Fahrenheit.
+1